Hollywood-style bargaining in the Grand Bazaar 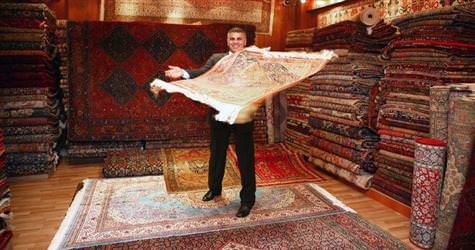 Arriving to Istanbul at the start of the week for a top-secret film project, famous American actor Ben Affleck spent 220,000 dollars on antique rugs at the Grand Bazaar. Affleck bargained to get 13,000 dollars dropped from the price and then paid with an unlimited credit card.

Famous American actor Ben Affleck came to Istanbul at the start of the week and then departed after offering a revival in retail for the Grand Bazaar. Touring the Grand Bazaar on Monday, Affleck managed to drop 220,000 dollars after bargaining, at the Imperio Otomano rug store.
Affleck successfully managed to bargain down the price for his rugs from 233,000 to 220,000. According to the news obtained, the famous actor first purchased four rugs and then later sent his assistants to buy two more that he had also seen.
According to Hakan Evin, the owner of the Imperio Otomano store, four of the rugs Affleck purchased are 100-year old antique rugs, while one is 40-years old and the other new. Evin described the rugs purchased as being a 40-year-old Hereke rug, a rug from Kayseri and three Persian rugs over 100-years old, one Melair, one Kum and one Heris rug and the other 100-year-old antique rug was from Uşak.
TO BE SENT TO LOS ANGELES
Evin said that Ben Affleck bargained well for the 220,000 dollars worth of rugs and would not release any information as to how low he went on the price, but simply stated; "we gave him a good discount." Affleck paid for the carpets with his credit card and is having them sent to his home in Los Angeles, California within the week.
220,000 DOLLARS PAID BY AMERICAN EXPRESS
Hereke rug (40 years)
Iran Melair rug (100 years)
Iran Kum rug (100 years)
Iran Heris rug
Antique Uşak rug (100 years)
Kayseri Silk rug

HE CALLED A 150,000 EURO RUG EXPENSIVE
Evin also mentioned that they showed Affleck a historical silk rug from Hereke, which costs 150,000 Euros, however when he heard the price he changed his mind about buying it, stating it was, "very expensive."
Store-owner Evin stated that Affleck loves Turkish and Persian rugs and has a special collection. According to Evin, Affleck said, "I want rugs that are unique and never before seen anywhere in the world."
Affleck arrived to Turkey on a Turkish Airlines flight from New York to Istanbul on Sunday, April 4th. He departed yesterday, putting an end to his short and surprising trip, in which the reason was never released. According to sources, the actor may be making a film that will shoot scenes in September in locations including the Grand Bazaar, Sultanahmet and Cappadocia.