Al Ani: We are waiting for investors 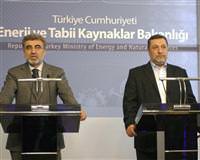 Emphasizing the intense heat suffered from in Iraq in the summer months, Iraqi Minister of Electricity Al Ani requests that a 2,000 megawatt electricity power station be built for the country. “Turkey helps a lot regarding this matter. I hope that investments by Turkish companies will increase.”

Meeting with Minister of Energy and Natural Resources Taner Yıldız and Minister of the Environment and Forestry Veysel Eroğlu, Iraq's Minister of Electricity Raad Shallal Al Ani expressed that the summer months in Iraq are excruciatingly hot and stated, "We have requested Turkey begin exporting electricity prior to the start of the summer and for Çalık Enerji to complete the 2,000 megawatt power plant construction by the start of summer in 2012. Turkey is extremely accommodating regarding this matter. I hope that investments by Turkish companies will increase."
Minister Raad Shallal Al Ani also expressed intentions to buy electricity from Turkey through two power transmission lines that will pass through Syria to directly connect Turkey with Iraq. "Our country is very hot. We are hoping to have the transmission lines completed and ready to initiate electricity imports from Turkey prior to the start of summer,' explains the minister. Relaying that Turkey has always helped Iraq when it comes to electricity, Al Ani states, "I am very pleased to be in Turkey. We are both friends and brothers."
THANKS TO ÇALIK
Discussing the difficulties Iraq faces in terms of electricity production, Al Ani states that he perceives the e;ectricity investments made by Turkish firms in Iraq to be an offer of Turkey's support. "Turkey and Iraq are connected by two rivers; therefore relations between the two countries should be doubled." Reminding that two months ago, Çalık Enerji had signed on to build two separate power plants in Iraq providing 2,000 megawatts of energy, Al Ani expressed that investments will continue. Also meeting with Çalık Holding Chairman of the Executive Board Ahmet Çalık, Minister Al Ani expressed just how significant the projects they are undertaking are for his country and thanked him.
When asked by journalists, "Do you want to see Turkish companies in new investments?" El Ani responded by stating, "I hope to."