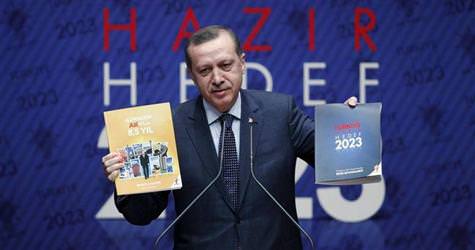 Details of Prime Minister Erdoğan's vision for the year 2023, in which a new two-city project will be established in Istanbul, have begun to surface. On the European side, Silivri and on the Anatolian side of the mega metropolis Kartal, are soon to become the city’s new lucky centers.

Prime Minister Recep Tayyip Erdoğan's plan to add two new cities to Istanbul is slowly becoming clarified. Two cities will be established on either side of the Bosphorus Strait in Istanbul, a mega metropolis and home to a population of 17 million. For the European side, the Silivri project and for the Anatolian side, Kartal are planned to become major centers for the city. The Istanbul Metropolitan Municipality's 1/100 thousand plan for the 2023 vision of the city contains details about the plans for the upcoming project. In order to direct east-west development in Istanbul to control structuring and population, the city is planned to be organized according to three divisions. Accordingly, Silivri, situated on the European side of the city and Kartal on the Asian side will both become two new city centers.

INTEGRATED WITH THE RAILWAY SYSTEM
Considered to be Istanbul's constitution, the 1/100 thousand scale environmental plan was first begun in 2006 and was later accepted in 2009 following court proceedings. According to the plan, Istanbul's central population will be spread into the surroundings which will integrate a rail system, a third Bosphorus bridge as well as the Marmaray rail tube tunnel. The plan foresees the creation of two new sub cities. Each new city, Silivri and Kartal, will house a four million population. Istanbul's center, situated between Bakırköy and Kadıköy, will carry Istanbul's remaining eight million in population.

EUROPE'S CENTER SİLİVRİ
The plan, which aims to transform Istanbul through a comprehensive structural transition into a global city, foresees the development of two new centers on either side of the city. Amongst the developments planned for Silivri and its surrounding districts, which has been selected to be the new city center situated on the European side of the city, is the establishment of a new airport, university as well as an industrial and fair center.