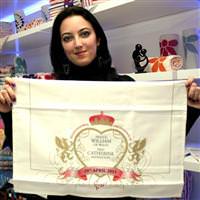 England’s Prince William’s and Kate Middleton are getting married in England on April 29th. The wedding invitation is none other than a towel, and that towel is made in Denizli.

Don't ask why, we already have and reached out to the Vice Chairman of the Executive Board of the company responsible for these very special invitations, Oğuzhan Katrancı to ask how this situation transpired.

According to Katrancı, a company that they work with in Germany recommended Ozanteks to the Royal Family.
"We worked together on the design," states Katrancı: "The final product of the towel was the result of a joint effort between England, Germany and Turkey. We also made some contributions of course…"
We had no contact with either Prince William or Kate Middleton; everything was done through an intermediary."
When asked if anyone from the firm was invited to the Royal Wedding, Katrancı states, "let us keep that secret."
The towels contain the couple's names embroidered in gold.
After receiving the order, within three weeks they had completed and delivered 40,000 towels to England.
"On the towels, we embroidered the prince and his wife-to-be's names within a gold heart. The invitations are made out of 100 % cotton and are very unusual. Gold embroidery is a different style for us. We realized a first for us, by using special methods and were able to do it.'

Don't think we didn't ask the price quoted for the towels, because we did, however Katrancı states that according to the contract of terms, they are unable to reveal exactly what was done as well as what was paid. We understand that when you have signed a contract with the British Kingdom, it may be best to honor it.