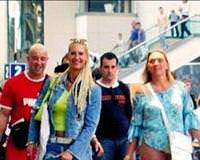 Russian Federation Ankara Ambassador Vladimir Ivanovskiy states, "The number of Russian tourists to visit Turkey will increase by at least one million with the lifting of visa regulations, reaching four million.”

Invited by the Samsun Chamber of Commerce, the Ankara Ambassador to the Russian Federation Vladimir Ivanovskiy paid a visit to Governor Hüseyin Aksoy. During the meeting, Ivanovskiy expressed expectations for a significant increase in visitors due to the lifting of mutual visa regulations. Noting that the increase in visitors would also affect trade volume, Ivanovskiy states, "Businessmen will have more opportunities to visit both countries. Last year, the number of Russian tourists that visited Turkey was almost three million. Now, with visa-free entry, we are expecting that figure to reach to at least four million."
Pointing out that over the past three years, 11 million Russian nationals have visited Turkey, İvanovskiy states, "Everyone who comes wants to return. In addition, the protocol signed between our State Leader Dmitri Medvedev and our Prime Minister Vladimir Putin and President Abdullah Gül and Prime Minister Recep Tayyip Erdoğan states, and their orders to us are to increase trade volume between the two countries to 100 billion dollars this year."
TARGET IS 100 BILLION DOLLARS
Stating that Samsun's connection to the Novrosski region will contribute to this objective, Ivanovskiy states, "The important thing is for logistically, sea transportation to continue safely between Samsun, Novrosski and the Caucasus. We are ready to provide all forms of support."
Governor Hüseyin Aksoy states that according to figures for Turkey and Russia, the joint trade volume for 2010 was around 26 billion dollars. Aksoy states, "The target is to reach 100 billion dollars in trade volume as soon as possible." Pointing out that Samsun is a city with railway, sea, highway and air transportation connections, Aksoy states, "We are currently preparing to reach the point of establishing activity in commercial relations with Russia at the forefront."