Durmuş era comes to an end as path remains the same 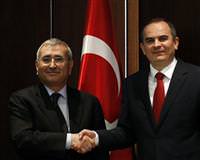 Erdem Başçı has officially taken over as Central Bank President, and gave signals he plans to follow the same path and policy as former president Durmuş Yılmaz. During Başçı’s address at the handing over ceremony, he stated; “Mr. President, your plan is our plan. Your vision is our vision. Your mission is our mission.”

The flag was changed at the Central Bank yesterday as the position of presidency was handed over. Taking over for Durmuş Yılmaz, Erdem Başçı's first message delivered as President of the Central Bank was that he plans to follow his predecessor's path. Erdem Başçı delivered the sign that the money policy followed, which has drawn international attention of late would continue during his acceptance speech, by addressing the former Central Bank president Durmuş Yılmaz to state, "Mr. president, your plan, is our plan. Mr. President your vision is our vision. Mr. President, your mission is our mission. This is my viewpoint on president Yılmaz."
Başçı went on to refer to his predecessor as his 'brother Yılmaz' and stated, "I have learned three things from him. The first is modesty, the second is common sense and the third is determination. This is what I have learned. I learned that one person can have all three characteristics at the same time. I want to thank you on behalf of all those at the Central Bank."
HE WILL DO BETTER THAN US
During his farewell speech, Durmuş Yılmaz expressed that the Central Bank was being handed over to trustworthy hands, and stated; "I am sure that the friend that comes after me will do even better than we have."