Hollywood to take over Cappadocia 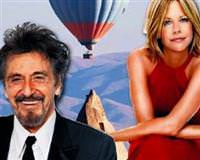 Over the past two months both Nicolas Cage and Monica Belluci have paid visits to Cappadocia, which is gaining interest in Hollywood. Up next to come to Turkey are Ben Affleck, Meg Ryan and Al Pacino…

The slew of newly opened boutique and concept hotels in recent years has not only drawn interest from Japanese tourists but is also titillating Hollywood…
In March, famous actor Nicholas Cage was in Cappadocia to film Ghost Rider 2. It appears the UNESCO listed cultural heritage site of Cappadocia is now receiving a peak in interest by other Hollywood stars.
First there was Nicolas Cage and then last week Monica Belluci stayed in Cappadocia. Now sources say they are expecting Ben Affleck, Meg Ryan and Al Pacino to also pay a visit to the site.
Hollywood stars are especially interested in Greek, Byzantine or Ottoman concept hotels which have been transformed into luxurious accommodation from the historical caves in the region. Suite prices where stars are selecting to stay begin at 600 Euros and can cost up to 2,000 Euros.
SECRET RESERVATIONS
Hotel operators explain that while some stars have made reservations months prior to their stay, some stars are arriving to hotels unannounced. Yakup Dinler, the owner of the Gül Konakları Oteli, where Monica Belluci stayed, states "I knew seven months ahead that Belluci would be coming. I even told my father." According to Ece Gülcüoğlu, manager of Sacred House, where Boy George stayed, states that sometimes famous people come without making reservations in order to ensure no one hears about their intended visit.