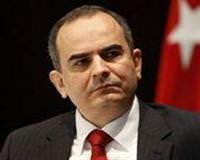 The lira was steady, best bid at 1.5160 against the dollar in early interbank trade, compared with a spot close of 1.5158 on Thursday, when new central bank governor Erdem Basci chaired his first monetary policy committee meeting.

The bank held its policy rate, the one-week repo, at 6.25 percent but lifted the reserve ratio on one-month lira deposits to 16 percent from 15 percent, and raised the ratio on foreign currency deposits of one year duration to 12 from 11 percent.

The increases would drain $1.4 billion and 1.5 billion lira, respectively, from the market, the bank said.

"It looks like foreign investors' expectations of interest rate hikes have been postponed to the year end," said one bond trader.

"The amount of liquidity that will be withdrawn from the market with this hike was very low and foreign investors began buying when they saw that," the trader sadi.

Bonds, which are the main asset foreign investors buy with lira, have been weakening on expectations that the bank would eventually have to raise interest rates.

Dealers said no-one in the market had expected a shift in the lira reserve ratio after a hefty move last month.

The central bank's strategy has been aimed at tightening monetary policy overall while preventing further appreciation of the lira as ultra-low U.S. interest rates spur capital inflows to emerging markets including Turkey.

Shares in leading mobile phone company Turkcell were suspended after disagreements at its annual general meeting on Thursday. A bid by TeliaSonera , which has a 37 percent stake in Turkcell, to remove the board chairman was unsuccessful.

Turkcell said its 2010 accounts and dividend payment were not approved at the meeting.

Shares in food company Ulker Biskuvi rose 9.7 percent to a session high limit of 6.32 lira after it announced the sale of a 10 percent stake in discount retailer BIM .