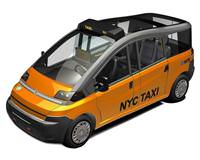 Turkish manufacturer Karsan has promised to assemble cars in Brooklyn if it wins New York's "Taxi of Tomorrow" concession, potentially returning auto making to the city for the first time in a century.

Karsan is a finalist along with Nissan and Ford to build a taxi cab that would replace the 16 models now authorized, a contract estimated to be worth more than $1 billion over 10 years.

The city's Taxi and Limousine Commission will announce the winner "in the very near future," a spokesman said.

Putting an auto assembly plant in Brooklyn would be a step toward addressing a lament commonly heard throughout the recession of 2007-2009: the United States has lost too many manufacturing jobs.

The proposal to build Karsan taxis in Brooklyn was first reported by the New York Daily News.

"New York City was the manufacturing capital of America in 1960. There hasn't been an industrial project that I can think of since then," said William Wachtel, president of Karsan USA.

The cars would be made with union labor that would be cost effective because of efficiencies in the Karsan assembly process, Wachtel said.

In 1900 there were six factories with 500 employees making cars in New York City, mostly electric or steam driven, according to historian Kenneth T. Jackson, editor of "The Encyclopedia of New York City."

"By 1916, the internal combustion engine had won the battle, and so far as I know New York manufacture had ended," Jackson said.

Brooklyn Borough President Marty Markowitz has become an enthusiastic advocate for the Karsan bid, though the decision rests with the commission.

"Here would be something novel: a foreign manufacturer, Turkish, actually manufacturing right here, putting Brooklynites and New Yorkers to work," Markowitz said. "That would say something that the rest of the world might want to (notice) very carefully."

Wachtel said the plant would be able to build 10,000 units a year, compared with the 3,000 per year needed for New York City taxis.

The excess would be sold as taxis in other cities and for the U.S. retail market, which requires 16,000 wheelchair-accessible cars a year, Wachtel said.