The real wedding will be in Istanbul 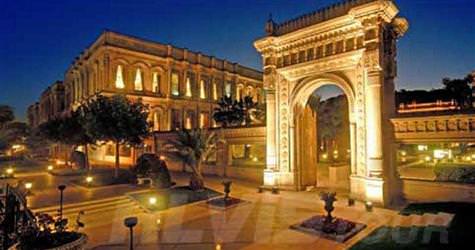 ‘Steel King’ Mittal’s niece will be tying the knot in Istanbul’s Çırağan Palace for a wedding affair that is expected to even outdo the recent royal festivities that kicked off Kate and William’s marriage.

While the world has been talking of the recent royal wedding held in England, Istanbul is preparing to host another wedding fit for a 'king'. Indian businessman and sixth wealthiest man in the world with a fortune toppling 31 billion dollars, Lakshmi Mittal will be wedding off his niece Vartika Mittal on Thursday at the Çırağan Palace.
Indian Businessman Lakshmi Mittal is a 25 percent shareholder of steel producers Ereğli Demir Çelik. Mittal has been named the richest man of both Britain and England numerous times.

TO A TUNE OF 2.5 MILLION EUROS
Two and a half million Euros have already been dished out solely to the Çırağan Palace which will host the three day and three night long wedding of Mittal's niece and English businessman Utsav. Three hundred of the Çırağan Palace Kempinski Hotel's 313 rooms have been booked to accommodate the 500 guests flying in for the festivities.

A SPECIAL WEBSITE
Guests will kick off the wedding tomorrow night with an Ottoman party in a villa along the Bosphorus. On Wednesday, a party will be held on the private Suada Island. On Thursday, guests will not only witness the wedding, but will also get to watch Whirling Dervishes, animation, pantomime and shaman dancing amongst a number of other celebratory surprises.

A special website has been set up for access by guests only for information on the wedding, such as weather forecasts, the history of Istanbul as well as transportation and visa information.

Responsible for ten percent of the world's steel-iron production…


Steel King Lakshmi Mittal, has become the world's fifth richest person due to his company Mittal Steel founded in 1975. With a 31.1 billion dollar fortune, Mittal is responsible for producing practically ten percent of the world's steel. Mittal operates in 60 different countries all over the world.

ISTANBUL BECOMES DESIRABLE SPOT FOR FAMOUS WEDDINGS
In recent years; Istanbul has become a highly desirable location to host a wedding. The foreign press has even named Istanbul as a "Wedding Destination" when describing the city this year. The fact that a number of weddings have been held by prominent Russian and Orthodox businessmen for their daughters and that Gaddafi's son was also married in Istanbul has not been overlooked by the press.

MITTAL'S DAUGHTER'S HAS WORLD'S MOST EXPENSIVE WEDDING
According to Forbes Magazine, steel millionaire Lakshmi Mittal held the world's most expensive wedding at 78 million dollars for his daughter Vanisha Mittal to banker Amit Bhatia in 2004.