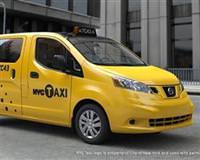 Nissan's design will be based on its NV200 minivan model.

"It's going to be the safest, most comfortable, and most convenient cab the City has ever had," Bloomberg said.

"We started this process to leverage our taxi industry's purchasing power to get the highest quality taxi," he noted. "The new taxis will be custom-designed to meet the specific demands of carrying 600,000 passengers a day."

On a conference call, Nissan officials said they expected to provide up to 26,000 taxi cabs over the lifetime of the contract starting in 2013, with a manufacturer's suggested retail price (MSRP) of about $29,000.

"It's very important for Nissan," said Carlos Tavares, Nissan's chairman in the Americas. "We deserve a better presence (in the United States) than we have today despite progress in recent years."

Officials at Nissan, which also provides taxis for Tokyo and Mexico City, said they also expected a marketing boost for the brand from television and film exposure.

The city's world famous yellow cabs feature in just about every feature film or television series based in New York. They were even the basis for the award-winning series "Taxi" that ran from 1978 to 1983, whose cast included Danny DeVito and Christopher Lloyd.

Nissan will be able to convert the NV200, which will get 25 miles per gallon, to run on electric-only engines beginning in 2017. The city will test the use of electric-engines in taxis using six electric Nissan Leafs, provided free to the city as part of the deal.

The NV200 is the first cab to pass federal crash testing with the taxi partition and taxi equipment installed.

The "Taxi of Tomorrow" will replace the 16 models now on New York's streets. The 10-year contract is expected to begin in 2013, when older models will begin to be phased out over the next three to five years.

Karsan's van had gained notice because of its transparent roof for better sight-seeing and a ramp for wheelchairs.

The NV200 taxi model will also include a transparent, panoramic roof panel.

The Turkish manufacturer had hoped to gain favor with city officials by promising to assemble the cars in Brooklyn, vowing to use union labor. The plant would have marked a return of auto-making to the city for first time in about a century.

Bloomberg said that Karsan was not selected largely because the company has little experience providing cars to the American market.

The Nissan NV200 taxis will be built at its plant in Cuernavaca, Mexico. New York City has 13,237 licensed taxicabs with 16 different models from nine manufacturers.