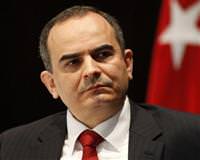 Data on Wednesday showing the current account deficit rose to a record high monthly level in March sparked selling of Turkish assets and deep doubt in the market that the central bank's unorthodox policy is working.

The deficit hit $9.8 billion in March, far higher than a consensus forecast.

In presentation slides published on the central bank's website Governor Erdem Basci said the foreign trade deficit would improve from the second quarter, excluding energy, and the cumulative 12-month current account deficit would start to recover from the last quarter of 2011.

The bank said it had started seeing the positive effect of its measures in April. Its steepest reserve requirement hikes took effect on April 15.

Analysts considered the bank's presentation an attempt to reassure markets after the March current account deficit sparked strong criticism of the bank and calls from economists to hike interest rates.

The lira IYIX= slipped to its weakest level in two months on Thursday.

"The central bank statement aims overall to reduce the tension in the market," said strategist Tufan Comert at Garanti Securities. He said that inflation, employment data and capacity usage showed the economy -- which Finance Minister Mehmet Simsek says probably grew 9 percent in the first quarter from a year earlier -- was not yet overheating.

"The macroeconomic outlook is deteriorating, overheating has become a serious macro risk, but the policy response is lagging, in our view, and the market is becoming much more nervous -- rightly so," analysts at Societe Generale said in a note.

"A change in the monetary policy stance is needed for a sustainable rebound in the lira ... macroeconomic developments require a switch to a more orthodox monetary policy, in our view."

The bank wants to keep credit growth to 20-25 percent this year after loans grew 34 percent in 2010, fuelling a huge consumer spending boom which has driven up the trade deficit.

However, despite raising RRRs five times since November, loan growth is still running at an annual 36 percent, data until end-April showed.

The bank loan data, alongside a soaring current account deficit, has heightened pressure on the bank to abandon its policy, even though its architect, Basci, was appointed governor last month.