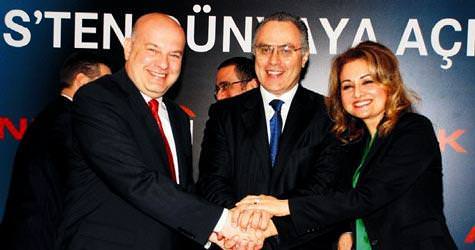 Akbank and Citi have joined forces with Wings. Akbank customers will now be able to withdraw cash from 13,000 Citi ATM’s in over 100 countries free of charge.

Akbank and Citi have signed on to a new project of the likes to be a worldwide example and product. For the first time in the world, two banks are coming together to became a comprehensive power by combining their characteristics. Citi, for the first time ever, will be sharing their credit card system with Wings with another bank, which will in effect allow both of them to fly high. With a 200 year history and services in over 100 countries, for the first time ever, Citi is sharing their worldwide accessibility with Akbank.
The Wings card, which will be able to be used by both Akbank and Citibank customers, will contain both banks' logos. Speaking at the promotion ceremony for the new collaboration, Akbank General Manager Ziya Akkurt states, "This collaboration, which first began in 2006, is an example to the world."
Citibank Europe-Middle East and Africa (EMEA) District CEO Alberto Verme explains that Turkey stands out due to having strong macro dynamic indicators and they expect it to be a shining star in the future and states; "Turkey has a place in the world and in Citi's radar."
NO ADDITIONAL FEES
According to Akbank Payment Systems Assistant General Manager Mehmet Sindel, there are over 400,000 Wings cards. Explaining that within the framework of the Akbank and Citi collaboration, Citi's four main characteristics will be included in Wings cards. Sindel goes on to state that as a result, Wings customers will be able to combine their Wings miles with the Citi miles program, meaning miles in the KrisFlyer with Singapore Airlines and the Executive Club program with British Airways will be able to be combined. In addition, Sindel points out that cardholders will be able to take advantage of Citi World Privileges' up to 40 percent discounts offered in over 4,000 restaurants, hotels and stores in 28 different countries. Sindel also points out that 75 percent of foreign credit cards are not accepted by U.S. online shopping websites, however with Wings Globeshopper, "cardholders will be able to shop from American websites and will be offered the best shipping prices. Cardholders will also be able to withdraw cash from the 13,000 Citi ATM's free of charge. In addition there will be no extra fees, interest or withdrawal charges to benefit from the new options offered.
'We have to congratulate the government'
Noting that Turkey's middle class is growing fast, Alberto Verme rained compliments on Turkey's economy. "We must congratulate the government. They have been leading the economy with extremely cautious parameters." We believe that in the next five to ten years, Turkey will continue to be successful due to their smart economic policy. Therefore, our conscience is clear."