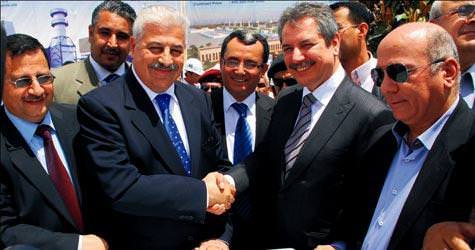 Iraq's Deputy Minister of Electricity Saad İbrahim Hammudi, underlining that the Ninova power plant project embarked upon by Çalık Enerji was considered a starting point, stated, ''I want the tribal sheiks of the region, as well as the dignitaries and the authorities of the Ninova district to offer support and assistance."
Mosul Governor Esil Nuceyfi, expressed how pleased he was that the foundation was being laid for a project promised to the public by the Iraqi government. Nuceyfi also went on to state that this project is a result of the alliance and collaboration between the Turkish and Iraqi government and is being realized by Çalık Enerji, which they also hope to expect even more from.
Stating that they hoped that Çalık Enerji, which has invested in the project, will receive much hospitality in Mosul, Nuceyfi states, ''We are expecting other companies of the scope of Çalık Holding to also conduct these types of projects. The best way for this project to be realized well is with the assistance of the region's tribes, bureaucrats and authorities."
Speaking in Arabic, Turkey's Mosul Consul General Ahmet Yıldız, reminded that one year ago, a committee came to visit the El Kayyara region in regards to the building of a power plant, and stated; "Thank God, one year later, we are now laying the foundation for a large power plant here. Çalık Enerji will realize this project in the best way possible. The Turkish government pays heed and is exerting efforts for all of Iraq. Turkey works to establish Iraq's reconstruction without interfering in the nation's internal affairs and will continue to do so."
CONTRIBUTING TO IRAQ'S DEVELOPMENT
Çalık Holding Chairman of the Executive Board Ahmet Çalık stated that they are contributing to Iraq's development and welfare through the projects they have undertaken. Expressing their great pleasure to have laid the foundation to the 750 megawatt Ninova power plant, which holds much significance for our neighbors and brothers in Iraq, Çalık states; "As the Çalık Group firm, we want to contribute to the steps taken for Iraq's development and welfare. In addition to the Ninova plant, we are also beguiling the 1,250 megawatt El Khariat plant for a combined total of 2,000 megawatts of power and will therefore play an important role in providing for Iraq's demand for electricity."
Underlining that in the summer months of next year, they will have put their first turbine into operation and will be producing electricity, Çalık states, 'We feel at home here and the experienced and expert Çalık Enerji staff will complete this project in time and will open it up to service in the best manner possible."
The power plant construction is scheduled to be completed within two years and is anticipated to provide 2,000 job opportunities.
TO COST 388.5 MILLION DOLLARS
The 750 Megawatt power plant to be built 60 kilometers south of Mosul at a cost of 388.5 million dollars will provide 250,000 homes (1.5 million people) with 24 hours of continuous electricity. The Ninova power plant, which will be completed in 20 months' time, will use six gas tribunes at 125 MW power each, which have been purchased from General Electric by The Iraqi government. The total 750 Megawatt strength power station will use natural gas, fuel oil and diesel to produce electricity.
In April, Çalık Enerji began construction on Al Khairat in Kerbela a power plant which will be Iraq's largest. The combined total electricity production for both power plants in Kerbela and Mosul will increase the current electricity production by 20 percent, providing a total of 3.5 million people with 24 hours of continuous electricity, as well as 2,000 jobs.