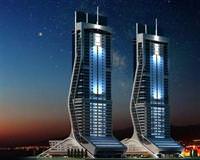 Saya İnşaat will soon be embarking upon a 150 million dollars project of 200-meter high twin towers in Izmir. The towers will be the second tallest in Turkey and the fifth in Europe.

While brand based residential projects are already on the rise in Izmir's real estate sector, soon the Aegean city will also be host to the fifth largest twin towers in Europe. Having signed on to the Folkart Narlıdere and Mavişehir projects in Izmir in the past, Saya İnşaat will now soon be building 200 meter high twin towers on the former Tekel land in Bayraklı the firm purchased from the Privatization Administration. Saya İnşaat Chairman of the Executive Board Mesut Sancak has announced that the twin towers, to be named Folkart Tower will be constructed with a 150 million dollar investment. Sancak explains that in 2010, the Izmir Joint Venture Group (İzmir Ortak Girişim Grubu) of which they were partners, purchased the land for 36.8 million lira from the Privatization Administration, however when the group delayed payment, Saya İnşaat went ahead and made the full payment, taking over the land. Sancak explains that the Folkart Towers will consist of 40 stories each with a meter-square price at the 2,500 dollar level. The high-rises will contain a shopping center, residences and offices at prices starting from 160,000 dollars. Sancak also went on to state that offices taking up an entire level may go for up to three million dollars.
VIEWS OF IZMIR BAY FROM THE OBSERVATION TERRACE
The project, which will be built on 27,000 square meters of land, was drawn up by Izmir's Yağcıoğlu Mimarlık. According to the project, the levels between the 8th and 18th stories will contain a variety of 1+1 and 4+1 residences with balconies that adhere to Izmir's architectural tradition. The office levels will vary between 65 square meters and 150 square meters in size. Sancak went on to note that they are currently in deliberations with Avi Alkaş from Jones Lang La Salle Consulting for the building of the Folkart Çarşı Shopping Center project. The project also includes both enclosed and open air swimming pools, a fitness center, basketball and tennis courts, a Kids Club, a Turkish bath and a Jacuzzi offering a series of social possibilities as well as will also house an observation terrace located on the top level at 200 meters' height with a view of the Izmir Bay.