It's all or nothing week 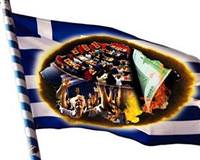 A Greek minister warned on Monday of "catastrophe" if parliament blocked a 28 billion-euro ($40 billion) package of tax increases and spending cuts after signs of revolt by some deputies in the ruling PASOK party.

Without approval for the measures, the European Union and International Monetary Fund say they will not disburse the fifth tranche of Greece's 110 billion-euro bailout program.

Athens needs the 12 billion euros to pay its bills next month and avert the euro zone's first sovereign default, which would send shockwaves through a jittery global financial system.

"I believe (the austerity plan) will pass. There are concerns, there is anguish, but above all there is common ground among PASOK's parliamentary group to assume a common responsibility," Defense Minister Panos Beglitis told Skai TV.

"Voting against the plan would lead the country into big difficulties the next day, bankruptcy and default," he said, warning that fresh elections, which would inevitably follow a defeat in parliament, would be a "catastrophe" for Greece.

A parliamentary ballot on the framework austerity package is expected on Wednesday, with lawmakers then due to vote on Thursday on a bill containing specific steps to implement it.

Defections over the past 13 months have squeezed Papandreou's support in the 300-member parliament to 155 seats, but now at least three PASOK deputies have expressed doubts or outright opposition to the plan and said they may vote against it.

In an interview with Spanish daily El Mundo on Sunday, Deputy Prime Minister Theodore Pangalos said he believed the first vote would pass but he said there may be more problems about the second implementation bill.

"That's where we may have problems," he said. "I don't know whether some of our legislators will vote against it."

However, on Sunday two of the three possible rebels hinted they could be willing to support it, provided they received assurances from the government.

"I have submitted a 16-point paper to Venizelos ... and I expect specific answers, on which (my stance) will depend," rebel lawmaker Panagiotis Kouroublis told state radio NET.

With Greece unable to return to international bond markets next year, as foreseen under its 110 billion-euro EU/IMF bailout, European leaders are working on a further bailout of a similar size including a contribution from private banks which would agree to a "voluntary" rollover of their Greek debt.

A French banking source said on Sunday the French Treasury had reached a deal with banks to make a rollover more palatable.

According to the daily Le Figaro, the deal would see creditors reinvest 70 percent of the proceeds when Greek debt comes due, receiving longer-term bonds and shares in a zero-coupon fund.

However some are suggesting the plan needs to go much further.

Axel Weber, the former president of Germany's central bank and once seen as a likely candidate to run the European Central Bank, said Europe needed to consider guaranteeing all of Greece's outstanding debt.

"Ultimately, solving the Greek debt problem will have to deal with the outstanding, past amount of debt, and there are, unfortunately, only very limited options: Either a default or partial haircuts or a guarantee for the outstanding amount of Greek debt," Weber was quoted as saying in the Wall Street Journal.

"Governments have to decide which option they want to go for, but the current piecemeal approach of repeated aid programs inevitably leads to the latter solution. At some point you've got to cut your losses and restart the system."

Hundreds of demonstrators beating drums, blowing whistles and waving Greek flags kept a vigil in Syntagma Square outside the Greek parliament late on Sunday, angry at the prospect of more painful cuts after three years of deep recession.

On Monday, protestors hung a huge banner off the Acropolis, the ancient rock outcrop which dominates Athens, proclaiming: "People have the power, they never surrender."

Greece's powerful unions, meanwhile, have called a two-day national strike from Tuesday to ratchet up pressure on the government. Many companies, including the main electricity group PPC which is slated for partial privatization next year, have started rolling stoppages.

New Finance Minister Evangelos Venizelos clinched an agreement with a team of EU/IMF inspectors on a raft of additional measures last week to plug a 3.8 billion-euro hole in the austerity package.

But the steps, which include a tax rise on heating fuel and lowering the minimum threshold for income tax to 8,000 euros a year from 12,000 euros, have alarmed some members of the ruling party.