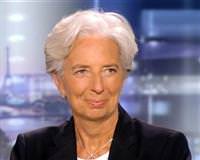 French Finance Minister Christine Lagarde on Tuesday clinched the top job at the IMF, keeping the international lender in the hands of a European at a time of growing concern over a possible Greek debt default.

Lagarde, who starts her five-year term as managing director on July 5, will find herself immediately immersed in efforts by the IMF and European Union to head off a Greek default that could touch off an international crisis.

Minutes after her appointment, Lagarde pressed Greece to move quickly to push through unpopular austerity measures that the IMF and EU say are a prerequisite for further aid.

"If I have one message tonight about Greece, it is to call on the Greek political opposition to support the party that is currently in power in a spirit of national unity," she told TF1 television.

Global stocks rose and the euro rallied as financial markets grew increasingly confident Greece's parliament would approve the five-year austerity program this week, which would unleash a 12 billion euro aid tranche from the IMF and EU.

Lagarde, 55, the first woman to head the IMF, succeeds Dominique Strauss-Kahn, who resigned from the IMF in May to defend himself against charges of sexual assault against a New York hotel maid. He denies the charges.

Her skills as a tough negotiator with a reputation for sealing deals under pressure will carry weight as she moves from defending France's economic interests to overseeing a global institution that must be seen as a neutral player around the world.

The succession race was one of the most hotly contested in IMF history as emerging market nations expressed displeasure with the 64-year tradition of having a European head the IMF and an American lead its sister institution, the World Bank.

The IMF board moved ahead despite lingering concerns about an unresolved legal case in France looking at Lagarde's role in a 2008 arbitration payout to a French businessman.

Lagarde said on Tuesday she was "completely unconcerned" by the case. A top French court has put off a decision on the matter until July 8.

The IMF may decide not to offer Lagarde a contract until the court makes a final decision, one board source said.

He said she would need to prepare for the possibility the IMF could face losses from the large bailout loans it made in recent years, including 30 billion euros for Greece.

Lagarde must also show a commitment to meritocracy by eliminating some nationality-based appointments, El-Erian added, citing the No.2 position at the fund which traditionally goes to an American.

Washington is already considering naming White House advisor David Lipton to succeed John Lipsky as IMF second in command at the end of August, according to sources close to the discussions.

Lagarde's selection over Mexico's Central Bank Governor Agustin Carstens was assured after the United States made its support clear, and emerging market economies China, Brazil, India and Russia did the same.

The United States, worried about the possibility of contagion from the Greek crisis, had cautioned that the appointment of the next IMF chief should not be delayed.

Carstens said he hoped Lagarde would pursue "meaningful progress in strengthening the governance of the institution, so as to assure its legitimacy, cohesiveness, and ultimately, its effectiveness."

Developing countries, resentful over a process that favored a European from the start, said they would hold Lagarde to her promise of giving them more voting power in the fund.

Emerging markets have long called for greater say in the IMF to reflect their growing weight in the global economy. They have threatened to leave the IMF's fold unless imbalances in the fund's voting power are corrected.

Strauss-Kahn pushed through changes in voting power that benefited mainly larger emerging economies like China, India and Brazil, but not as much as they had wanted.

"Our support is for her to be a manager not of Europe's problems but of the world's. We will be watching out for this from the first day," Mantega said at a regional trade meeting in Paraguay.

In justifying why India had gone with Lagarde in the end, Indian Finance Minister Pranab Mukherjee told Reuters it was in part because it wanted to be part of the consensus that had formed around her.

Speaking while on a visit to Washington, Mukherjee said the IMF's selection process should have been more transparent but he believed Lagarde was a worthy candidate.

Arvind Subramanian, a senior fellow at the Peterson Institute in Washington, said emerging economies had missed a golden opportunity to force change at the IMF helm by failing to rally around Carstens or by putting up their own consensus candidate.

"It is a rigged system that needs to change but ... the only reason the outcome didn't match what (developing nations) wanted was because emerging market countries did not grab the opportunity," Subramanian said.

Global development group Oxfam said Lagarde's appointment was "farcical" and had damaged the credibility of the IMF.

"There were noises made about openness, but the decision was made before the candidates were interviewed," said Sarah Wynn-Williams, Oxfam's head of relations with the IMF and World Bank.