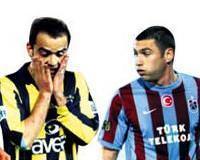 Allegations of game fixing, which began with Fenerbahçe and has since easily turned into the largest scandal ever in Turkey’s Football federation history, has resulted in apprehension felt by firms acting as sponsors to the teams involved. Faced with a possible investigation, sponsoring firms are rethinking whether to continue offering support.

Sponsorship firms, which tend to rake in a significant share of football teams' annual revenue, may now have to rethink their plans as the game-fixing scandal, which started off with Fenerbahçe, grows. Brands involved in the 220 million lira sponsorship budget of some of the top Spor Toto Süper League teams are now beginning to panic.
Laying the issue on the table, a number of sponsorship brands are considering postponing, cancelling or switching contracts. The largest concern of the firms involved is being connected to football teams currently facing allegations of game-fixing. At present, Fenerbahçe's sponsors are especially concerned as to where the investigation may lead. Chairman of Anadolu Grubu Tuncay Özilhan states, "Once the investigation reaches clarity, we will reassess our sponsorship. Our sponsorship agreement with Fenerbahçe is over, therefore we will not be negatively affected by the situation."
THE PROCESS BEGINS
Toyota CEO Ali Haydar Bozkurt states the following: "With football being connected to these types of allegations, it is inevitable that the brands that have offered their support will incur harm. As this is a new development judicially, we are watching the developments closely and will evaluate the process." The Fenerbahçe Sports Club's main sponsors Denizbank, Acıbadem, Avea and Aras Kargo are amongst the firms that will be closely following developments. Acıbadem Group officials state that they are assessing the developments on behalf of the entire Turkish football league and not just from a Fenerbahçe standpoint. Aras Kargo officials express that it is a sad development, however they are primarily involved in basketball sponsorships.
FENER LOSES 30% IN STOCK EXCHANGE
The earthquake which has begun to rattle the Istanbul stock exchange, set off by match-rigging allegations, continues at full force. On the second day of transactions, Fenerbahçe saw the highest loss of share in the Sports Index at 30%. Monday's shares recessed by 19.3 percent while concerns that Fenerbahce's Champions League, Championship and Super League revenues may drop continued yesterday. Shares closed with an 11.74 percent loss at 50.75 lira. The market value suffered a 30% loss recessing to one billion, 162 million liras. Fenerbahçe's losses are not solely restricted to the stock exchange however. The team's broadcasting revenue, of 28.4 million TL success points to 21 million TL, is face to face with the danger of losing 15 million TL. In addition, should the team not take part in the Champions League, they also face losing 15 million TL.
A 220 MILLION MARKET
The Turkish football market reached a one billion, 600 million lira value in 2011. Sponsorship revenue makes up a significant portion of this figure. The revenue incurred by the teams in the Spor Toto Süper League alone, is speculated to have surpassed 220 million liras last season.
THE LEAGUE CALENDER MAY FACE ALTERATIONS
The beginning of the legal process may result in changes in the league schedule this upcoming season. The 2011-2012 season may start later than usual and the possibility of changes in teams participating in European cups, may result in decreases in sponsorship revenue.

The lions have their share…
Galatasaray has acquired their fair share of Sponsorship revenue. In 2011, the club acquired 200 million TL in revenue, 90 million TL of which was from sponsorships. Agreements with Türk Telekom, Petrol Ofisi and Medical Park raised the figure even higher.

Stepping on the gas with Toyota
Beşiktaş, which has just signed a three-year and ten million TL sponsorship agreement with Toyota, raked in 266 million TL for the club's budget. Amongst the establishments main sponsors are Cola Turka, Sarar, Acıbadem, Doğuş Otomotiv, Türk Hava Yolları and Yurtiçi Kargo.

The most significant source of income
In recent years, Trabzonspor has managed to acquire significant revenue from sponsorship. The club's revenue, as a result has surpassed 135 million TL. Amongst the clubs most significant supporters are Ülker, Medical Park, Nike, İstikbal, Anadolu Sigorta, Doğuş Otomotiv and THY.