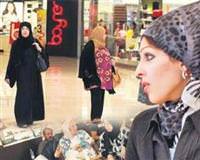 This year, Turkey is seeing double the number of Arab tourists compared to last year. Filling up the nation’s visitor capacity, Arabs are making shopkeepers smile with daily spending on average at 2,000 Euros per person, which is three times that spent by European tourists.

With Turkey's increasingly popular image in the Arab world, due to the nation's Middle East policy and Prime Minister Erdoğan's 'one minute' outburst, the popularity of Turkish television series and the lifting of visa regulations with a number of Arab countries, Arab tourists are bringing smiles to the faces of tourism operators and shopkeepers alike.
Arab tourists are now filling the country's mega metropolises such as Istanbul, which is generally vacated by residents in the summer's June and July months. Arab visitors are selecting Istanbul primarily as a destination point followed by cities; Bursa, Trabzon, Abant, Yalova, Marmaris, Bodrum and Antalya. They tend to travel in groups of eight to ten and stay for ten days on average. Due to this increased interest, hotels are increasing their Arabic guide services and menus are being provided in Arabic for Arab tourists who are spending 2,000 Euros a day on average in shopping centers and restaurants. While the 40% increase in the number of Arab tourists to come to Turkey compared to figures from last year is eye-catching, shopkeepers are also explaining that that this year Arabs have also increased the amount of spending done during their stay.
Ayman Maslamani, the owner of Heysem Tourism, which operates tours from Middle Eastern and Gulf countries states that an average family of ten that stays for ten days, spends approximately 10,000 dollars for accommodation in addition to 2,000-3,000 Euros worth of spending on shopping .
RAMADAN PROMOTION
Tayfun Döşkaya, General Coordinator of The World of Viaport in Kurtköy explains that Arab tourists have filled sixty percent of capacity in the hotels they run, and also states that due to their high spending in shopping centers, store owners are pleased. Touristic Hoteliers and Tourism Operators Union Chairman Timur Bayındır notes that they have begun a joint campaign with Turkish Airlines to bring Arabs to Turkey during the month of Ramadan, which is a time they usually tend to spend at home.

SHOPPING CENTERS OFFER COMMISION FOR BRINGING IN TOURISTS
Expressing that Shopping Centers are pleased at the amount of spending that is being made by Arab tourists, Maslamani states, "Shopping Centers are telling agents to 'bring in Arab tourists', suggesting a commission of 2-3 TL per tourist." According to the owner of Ottomano Halı in the Grand Bazaar, Hakan Evin, Arab tourists are not buying gold; however those from higher income groups tend to purchase 40,000 to 50,000 dollars worth silk rugs.
SPENDING TRIPLED OVER EUROPEANS
Arab tourists, who have designated high budgets for food and textiles purchases, tend to spend 2,000 Euros a day per person. This figure surpasses triple that of the 630 dollar average spent by Europeans last year.
NO SEATS AVAILABLE ON FLIGHTS
Flights to Turkey from the Middle East and Gulf countries were sold out for the month of July. Emirates Turkey manager Bahar Ahmed states that it is because of Ramadan, which takes place this August, that flights were filled to 100% capacity for the months of June and July. Ahmed also noted that flights were also filled for September.