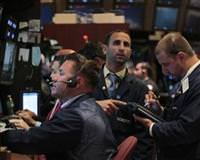 Stocks fell on Wednesday, and the S&P 500 hit a new low for the year as the latest data triggered more pessimism about the economy's outlook.

The Nasdaq composite index briefly turned negative for the year before bouncing off its worst levels of the day.

The S&P industrial sector .GSPI was down 14 percent since its April 29 high. Wednesday's weakest sector was energy .GSPE was down 1.7 percent.

Adding to the economic worries, data showed the U.S. services sector fell in July to its lowest level since February 2010, while new U.S. factory orders fell in June, pulled down by weak demand for transportation equipment.

The news followed weaker-than-expected manufacturing data earlier this week, causing more worries about a pullback in the recovery.

The market sold off initially but pared some losses after finding support.

But with the S&P 500 on track for an eighth straight down day, which would match a losing streak in October 2008 during the financial crisis, strategists said investors were losing excuses to keep stocks rising.

Some analysts see the S&P 500 in the process of creating a bottom, which creates a buying opportunity.

The S&P 500 turned negative for the year on Tuesday, falling through its key 200-day moving average. On Wednesday, the benchmark broke below the intraday low for the year of 1,249.05, seen as the next critical technical support.

Markets got an initial boost after payrolls processor ADP reported that U.S. private employers added more jobs in July than expected, but the gains were quickly erased by the news on the services sector and factory orders.