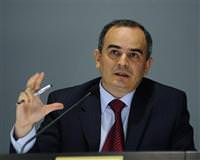 Turkey's central bank will hold an emergency meeting on Thursday, expected to jack up overnight borrowing rates in a bid to bolster a weak lira amid growing concerns that its economy is overheating.

The bank's announcement of an interim meeting before its next scheduled sitting came as Moody's rating agency warned overdependence on "volatile" sources of foreign capital to finance a large current account deficit left it exposed to the euro zone's worsening debt crisis.

The bank said it was calling a meeting to discuss the euro zone crisis and global growth -- worries over which have driven investors to withdraw money from riskier emerging markets, adding to pressure on the battered lira.

Analysts view the central bank's strategy of low interest rates and high reserve requirements for banks as too dovish given the strength of domestic demand, fuelling imports and adding to inflation pressures.
A hike in the bank's policy repo rate is possible, but unlikely at this stage, according to analysts.

But raising the overnight borrowing rate would undo the first step the bank took last November to deter inflows of hot money and weaken an overvalued lira.

The higher overnight borrowing rate, currently 1.5 percent, may reduce some of the immediate pressure on the lira.

"We expect the overnight borrowing rate to be hiked tomorrow, perhaps by as much as 400 basis points, which would reverse the steep cut in this instrument delivered in November last year," said Finansbank chief economist Inan Demir.

Underlining the risks for an economy with a current account deficit expected to be equivalent to 10 percent of GDP or more this year, Moody's warned the upward trajectory of Turkey's ratings may be harmed if action is not taken.

"If vulnerabilities continue to increase -- such as the large current account deficit, growing inflationary pressures and strong credit growth -- and external buffers diminish or remain the same, Turkey's resilience could be undermined," Moody's warned. "This, in turn, could cause downward pressure on the credit."

The bank's regular MPC meeting is scheduled for Aug 23.

The lira has slid sharply in recent weeks but recovered at the end of last month after comments by Governor Erdem Başçı that the bank had the tools to stop the currency weakening further, and was monitoring the inflationary impact of the depreciation.

That suggested to economists it would take action if the currency loses more ground after running a policy of low interest rates and high reserve requirements for banks. Many analysts fear the strategy is too dovish given the risk of an overheating economy.

Turkey notched 11 percent growth in the first quarter, though it is expected to slow over the rest of the year.

The lira firmed to 1.7030 by 1020 GMT, compared with 1.7220 before the bank's announcement. Last week the lira weakened to 1.7340, its lowest level since March 2009, but rebounded when the central bank cancelled daily foreign currency buying auctions and reduced forex reserve requirement ratios.

The yield on the benchmark May 15, 2013 benchmark bond <0#trtsysum=ıs> fell to 8.68 percent from 8.77 percent on Tuesday, also driven by lower-than-expected July inflation.

The central bank has said it may gradually narrow the interest rate corridor if global growth worries continue to effect risk appetite negatively. The corridor is the difference between its borrowing and lending rates.

"I don't expect the bank to make policy changes regarding required reserve ratios and forex selling auctions tomorrow, but it will probably stress that they are among the options."

The bank's policy rate, the one-week repo rate was left unchanged at 6.25 percent at its last meeting, while the overnight borrowing rate remained at 1.5 percent and the overnight lending rate stayed at 9 percent.

"The Central Bank also raised the prospect last week that it could still cut its main policy rate if the global economic recovery shows serious risks of stalling, but I think that this is unlikely at present," said Royal Bank of Scotland economist Timothy Ash.