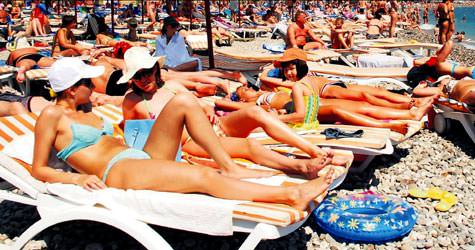 Turkey’s tourism figures are soon to recover from incorrect accounting. With calculations four billion dollars behind annually, the method of calculating revenue stands to be changed. From here on out, airplane flights, airports and shopping income will also be included in tourism revenue figures.

Signs show that tourism revenue, one of the most significant financial items in the current account deficit, may be recovering from incorrect calculations. Ministry of Tourism Undersecretary Özgür Özaslan states, "Our tourism revenue is officially higher than the calculations made by the Turkish Statistical Institute (TÜİK)." Stating that they have used what is referred to all over the world as a 'satellite account' and dealing with a variety of values in which to base revenue, Özaslan turned the focus on to tourism operators. Mentioning that there is a variety of data which is not taken into account in tourism operators' revenue calculations, Özaslan states that the 600 dollar per person spending figure is actually closer to 900 dollars when calculated correctly. Özaslan also states that revenue need be calculated according to region.
Should the prior calculations be readjusted due to their inaccuracy, last year's 20.8 billion dollar tourism revenue would actually come out four billion dollars higher, reaching 25 billion dollars. This would of course relieve financing of the current account deficit.
WATCH OUT FOR PACKAGE TOURS
AKTOB, The Mediterranean Touristic Hoteliers and Tour Operators Union Chairman Sururi Çorabatır is also of the opinion that tourism revenue needs to be calculated separately according to region.
Çorabatır states, "One can just look at the average prices of 4-5 star hotels to understand that the correct revenue is actually more than how the calculation method used now shows. Out of every four tourists that visit the Mediterranean region, 3.8 come on package tours. However, this calculation method only takes into consideration 40 percent of package tours. Even if no other indicator is taken into account, in its simplest form if we divide the price of package tours by number of tourists, this figure would still be higher. They are still using very antiquated methods which need to be changed as soon as possible."
Per person spending would be 900 dollars...
TUI Turkey's Executive Board Member Hüseyin Baraner concurs that calculations are not conducted correctly and states, "There is a significant amount of tourist spending that goes unrecorded. The majority of tourists do not use credit cards in Turkey. Instead, they go to markets or purchase items from shopkeepers by using cash. This is very difficult to account for. However if a productivity index is set up for the tourism industry, then it could be easier to record everything. Through our own calculations, we know that the 600 dollar average for tourist spending is actually at 900 dollars."
Revenue would raise to 25 billion dollars...
Stating that this issue was discussed during a meeting at the Turkish Statistical institute, TÜROFED, Turkey's Hotelier Federation Chairman Ahmet Barut states, "There exist other parameters when calculating tourism revenue. For example, revenue derived from charter planes, transportation, transfers and airport revenue are not included in accounts. We were able to persuade TUİK, and showed that calculations for both shopping and hotel revenues were also inaccurate. The survey system is one that has high room for error. With the correct calculations, this year I anticipate tourism revenue to reach 25 billion dollars."