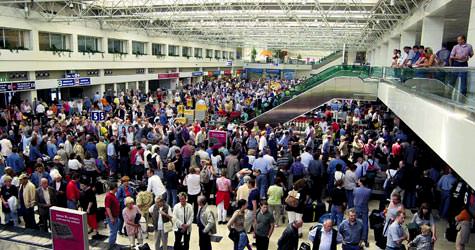 Citizens will soon be hitting the road, air and sea for a well-deserved vacation for the Ramadan holiday. Over 450 buses and almost 400 flights have been scheduled for the holiday week.

While tourism operators are hoping this year's Ramadan holiday will be extended to nine days, citizens are already making plans as if it were a done deal.
With hundreds of thousands expected to travel during the extended holiday, bus and sea ferry companies have had to add extra services to accommodate the record breaking demand. A majority of vacation-goers will be departing on Friday, August 26th and plan to return on September 3rd or 4th. With airlines adding almost 400 extra flights, 18,000 buses are scheduled to transport 450,000 passengers over the holiday season. Istanbul's Sea Ferries, İDO, will be operating 4,000 services during the holiday. From August 27th to the 30th, Turkish Airlines will be adding 35 extra flights. For the anticipated return dates, Turkish Airlines will be adding 45 extra flights, bringing the total number of additional flights to 80 for the holiday season. Turkish Airlines officials have announced that at the start of the Ramadan holiday they will be operating 17 additional flights to Bodrum, nine to Dalaman, six to Antalya and three extra flights to Trabzon. For return flights, Turkish Airlines will be adding 11 additional flights from Bodrum, 10 each from Antalya and Dalaman, five from Trabzon, four from Northern Cyprus THY, an extra flight each from Adana and Izmir and three extra flights from Kuwait. For this holiday season, Pegasus Airlines will be breaking records with over 300 extra flights added. The airline has added most flights to Dalaman, Antalya, Bodrum, and internationally to Northern Cyprus, Italy and London.

150 million dollar transportation economy
In addition to the anticipated crowds in the nation's airports, bus stations are also expected to be crowded during the holiday. According to the Bus Drivers Federation Chairman and Ulusoy Seyahat General Manager Mustafa Yıldırım, there is 150 million dollars worth of transportation economy that will be coming in solely from bus trips. Yıldırım also states that Ulusoy Seyahat will be transporting 150,000 passengers alone. According to Turkey's Bus Drivers Federation (TOFED) General Secretary Mevlüt İlgin, 450,000 passengers are anticipated to travel throughout the country during this holiday season. In Istanbul alone, the average number of 40,000-50,000 passengers daily will be increased to 120,000. İlgin states that due to the inability to satisfy the company's demands, an additional 8,000 buses have been added with permission granted by the Ministry of Transportation.

During the holiday, sea transportation will also be high in demand. İDO will be operating 4,000 services at a special price for the Ramadan holiday.