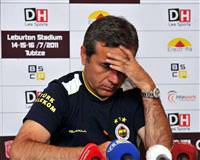 Turkish soccer champions Fenerbahçe's loss of revenues due to its exclusion from this season's Champions League will amount to around 25 million Euros ($36 million), it said in a statement to the Istanbul Stock Exchange.

The Turkish Football Federation announced on Wednesday it had barred Fenerbahçe from the competition under pressure from UEFA in connection with a match-fixing investigation involving the top Istanbul club.
Shares in Turkish soccer champions Fenerbahçe (FENER.IS) dropped 9.15 percent to 43.7 lira at the opening on Thursday on news of its exclusion from the Champions League in connection with a match-fixing investigation.
Shares in Trabzonspor jumped 10.5 percent to 14.7 lira after it emerged that the Black Sea club will replace Fenerbahçe in the competition.
Meanwhile, Trabzonspor said on Thursday that it expects 20 million euro income for UEFA Champions League after the Turkish Football Federation (TFF) barred Turkish club Fenerbahçe in this season's Champions League in connection with a match-fixing investigation which has shaken Turkish football.
Trabzonspor were runners-up to Fenerbahçe in the Turkish league last season.