Greece must fulfil conditions to be in euro zone 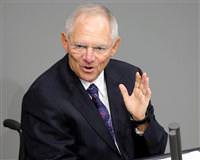 Greece must make sure it fulfils the conditions needed to be a member of the euro zone, German Finance Minister Wolfgang Schaeuble said on Thursday, making him one of the most senior members of the government to question Greece's membership of the currency bloc.

He added that Germany stands ready to help Greece, but if the country did not meet the requirements set by the European Union, European Central Bank and International Monetary Fund, further aid payments could not be granted.

"I understand that there is resistance among the Greek population to austerity measures... But in the end it is up to Greece as to whether it can fulfil the conditions that are necessary for a membership of the common currency," Schaeuble said on Deutschlandfunk radio.

"We can give no discounts," added Schaeuble.

Backsliding in Athens has put a new aid payment from the country's international lenders in danger.

This has angered some German lawmakers, including several from Chancellor Angela Merkel's conservatives, who have started calling for Greece's ejection from the 17-nation currency area.

The head of the Christian Social Union, one of the three parties in Merkel's centre-right coalition, added his weight to the debate on Wednesday, saying he could not rule out the possibility of Greece leaving the euro zone.

Euro zone sources told Reuters on Wednesday that Greece will have to compensate for slippage on its budget deficit target this year in the 2012 budget and in other areas of reform agreed with international lenders to get the next aid tranche.

"Italy knows it must correct its budget deficit, its high indebtedness and it has now, thank goodness .... after some backtracking, decided to make massive cuts to reduce the deficit. Let us hope that it stays on this course."