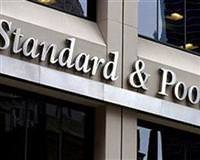 "We could raise the ratings on Turkey if, once the economy cools as we expect, it can reduce its current account deficits and slow its domestic credit growth without too badly affecting its fiscal accounts or financial-sector stability," S&P said in a statement. "We could also raise the ratings if deeper reforms to social security resulted in a stronger fiscal performance that started to substantially reduce the government's debt," it said.
The following statement was released by the rating agency: Standard & Poor's Ratings Services today raised its local-currency sovereign ratings on the Republic of Turkey to 'BBB-/A-3' from 'BB+/B'. At the same time, Standard & Poor's affirmed its national scale ratings on Turkey. We also affirmed the foreign-currency sovereign ratings on Turkey at 'BB/B'.

Turkey's recovery rating remains at '3', and its transfer and convertibility assessment (T&C) at 'BBB-'. The outlook on both the local- and foreign-currency long-term sovereign ratings is positive.

The local-currency upgrade reflects our view of continuing improvements in Turkey's financial sector and the deepening of local markets. In the capital markets, the government yield curve now extends to 15 years, and the average maturity of local currency government debt, which comprises three-quarters of general government liabilities, has risen to 34 months in 2011 from 24 months in 2008. Government debt is now predominately denominated in Turkish lira and issued at fixed, nominal rates. In the foreign exchange markets, the Turkish lira represented 0.7% of global turnover at end-2010, up from 0.2% in 2007, according to the Bank for International Settlements. We also believe that the Turkish banking system is adequately capitalized and we expect the state will reduce its holdings of some public-sector commercial banks. The two-notch differential between the foreign- and local-currency ratings also reflects Standard & Poor's revised criteria for rating central governments (see "Sovereign Government Rating Methodology and Assumptions," June 30, 2011). Under these criteria, the central bank's track record of independent monetary policy--with a free floating exchange rate regime--and the depth of the local currency debt markets warrant a two-notch distinction.

Our positive outlook indicates that we see ratings upside. We believe that the government will remain committed to stabilizing net general government debt/GDP at around 35% by 2014, despite our expectations that GDP growth will slow to just over 3% between 2012 and 2014 from its heady recent pace of 6% (projected for 2011). We forecast that the general government's primary surplus will slightly exceed 1% of GDP for 2011 before deteriorating mildly over the ratings horizon due to an anticipated economic slowdown. Much of 2011's expected fiscal outperformance is due to temporary factors, including the credit-driven expansion of nominal GDP by some 15%, as well as the government's success in raising funds via a restructuring of past tax liabilities. Restrained fiscal policy before the crisis means that general government debt is relatively moderate, at 41% of GDP in 2010. While Turkey's large and resilient economy benefits from favorable demographics, the social security deficit continues to be the major driver of the headline general government deficit.

We see Turkey's external position as the weakest element in its credit profile. We expect Turkey's current account deficit will exceed 40% of current account receipts (CARs) this year (equivalent to 10% of GDP) and we note that net external debt of the financial sector has risen from 6% of CARs at year-end 2008 to a forecast 42% at year-end 2011. While, at 13%, financial sector external debt is still a relatively low percentage of GDP, Standard & Poor's rating methodology focuses on an economy's foreign-currency-generating capacity (that is, CARs) in the denominator as the key measure of debt-servicing ability. We estimate that Turkey's gross external financing needs (as a percentage of CARs plus usable reserves) will reach 145% in 2011, one of the highest ratios for a rated sovereign. This heavy reliance on external savings exposes Turkey to shocks, either domestic (for example if Turkey's recent high domestic credit growth resulted in future bad loans) or external (say, if rising risk aversion were to prompt foreign investors and bank credit officers to reduce exposure to Turkish entities).

The outlook on the ratings is positive. We could raise the ratings on Turkey if, once the economy cools as we expect, it can reduce its current account deficits and slow its domestic credit growth without too badly affecting its fiscal accounts or financial-sector stability. We could also raise the ratings if deeper reforms to social security resulted in a stronger fiscal performance that started to substantially reduce the government's debt.

The ratings could stabilize at current levels if an economic hard landing reduced access to external funding or weakened the government's fiscal accounts beyond our current expectations.