Sabancı is a global citizen 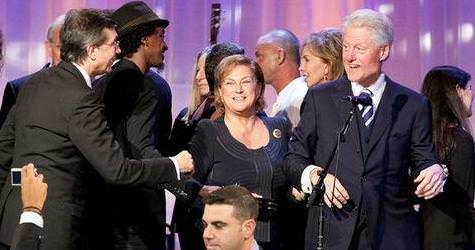 Established by former U.S. President Bill Clinton, the Clinton Global Initiative awarded Sabancı Holding Chairwoman of the Executive Board Güler Sabancı' with the 'Clinton Global Citizen Award' at a ceremony held in New York.
Chairman of the Coca Cola Company Muhtar Kent handed the award to Sabancı. Commended for her contributions to women and girls as well as for her efforts in Turkey's social, cultural and economic advancement, Sabanci was awarded in the 'Leadership in the Corporate Sector' category. During her acceptance speech, Sabancı stated that the Sabancı Foundation works with U.N. organizations as well as Turkey's Ministry of the Interior in order to improve human rights for women and girls. Explaining that Muhtar Kent had once said to her, "The next century will be the century for women", Sabanci stated that it was due to these words that she loves Kent even more. Noting that there is a lot needed to be done in order to solve the deep inequalities, Güler Sabancı stated, "In terms of philanthropy, this collaborative partnership worked as an example and truly made a difference. We will be expanding the project and continuing our work for three more years."
THEY DESERVE RECOGNITION
Former U.S. President Bill Clinton stated that those awarded the Clinton Global Citizen Award deserved to be rewarded for their efforts to find innovative solutions.
Working for women
During his speech, COCA-COLA CEO Muhtar Kent stated that a company can also be measured by the innovations, opportunities and social benefits presented to society and not just with shares and three month reports.
Kent also went on to express the following: "Güler Sabancı never allowed for traditionalist gender roles to limit her in any way. She now works for women to have power in politics, the business world and in public arenas. In fact, she was the first CEO to sign on to the UN Women's Empowerment Principles in Turkey."

Undertakings worth 63 million dollars
The Clinton Global Citizen Award was first awarded in 2007 with recipients in the Corporate Leadership Category being former Coca Cola Chairman Neville Isdell, Avon CEO Andrea Jung and TNT CEO Paul Bakker. Established in 2005, the Clinton Global Initiative (CGI) has signed on over 2,000 various undertakings intending to make change the lives of 300 million people in over 180 countries. Once realized, the investments needed for said undertakings is anticipated to be 63 billion dollars.
To have a charitable family is a privilege
"To have been raised in a family which considered social responsibility and philanthropy a basic value and to work for an establishment such as Sabancı Holding has been a privilege for me personally, " states Sabancı, who went on to express how this award for her efforts in improving women and girls human rights has encouraged her. Along with Sabancı, famous musician Sting and his wife Trudie Styler were also awarded in the Philanthropic leadership Category.
An award received on behalf of 57,000 employees
Emphasizing that she was receiving this award on behalf of the 57,000 employees of the Sabancı conglomerate, Sabancı stated, "In addition, I would like to commemorate everyone in this conglomerate, which has provided contributions spanning seventy years back by my grandfather, father and especially to my uncle and mentor Sakıp Sabancı as well as my other uncles whose basic values have driven them to serve the development of the community. Our present vision is to create a sustainable difference in all areas we work in, including philanthropy, education and the arts."