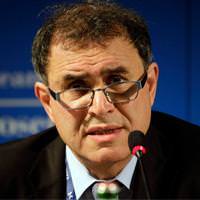 Roubini, a famed market bear closely followed by Wall Street because he predicted the U.S. housing meltdown that precipitated the last global downturn, said emerging economies would feel pain in the event of a recession in the developed world but would avoid a full-fledged slump themselves.

"These shocks are going to keep on occurring. Thinking the problems of the euro zone are going to go away is delusional," Roubini told an investment conference in Johannesburg.

"The risk is actually that there is going be deceleration and the beginning of an economic contraction."

The euro zone debt crisis has spread to French banks, and countries such as Spain and Italy, which were both too big to fail and too big to be bailed out, he said.

Policymakers in advanced economies were also running out of tools to promote stimulus.

Global stocks slipped again on Wednesday as investors awaited the outcome of a Federal Reserve meeting that could offer further stimulus for the ailing U.S. economy, while more uncertainty about Greece's debt crisis pressured the euro.

It is unclear, however, how effective new measures would be in bolstering U.S. growth, given that economic expansion is slowing despite the central bank's $600 billion bond-buying programme that ended in June.