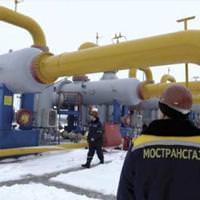 Turkish Energy Minister Taner Yildiz said on Thursday the country might terminate one of its contracts unless it obtains a sufficient price reduction.

"There is a 6 bcm contract on the West pipeline that's about to end. We will terminate the contract if we don't see a sufficient price reduction," he said.

Turkey joins a number of customers in seeking price cuts from the world's biggest oil and gas exporter, whose contracts link gas prices to global oil and oil product prices.

Gazprom is also in talks with German utility E.ON (EONGn.DE), which as well as other European clients is asking the Russian company to cut prices in long-term contracts by including a spot pricing element into deals.

Gazprom has agreed to some concessions, but the bulk of its contracts is still tied to oil pricing.

Earlier this week the European Commission raided the offices of Gazprom subsidiaries in Europe as part of a probe into suspected breaches of anti-trust policies.

"We believe that the growing pressure on Gazprom is negative from both the market and the fundamental perspective," Russia's state-controlled VTB Capital said in a note.

European politicians have viewed Gazprom, which covers a quarter of the European Union's gas needs, as the Kremlin's trump card in its foreign policy.

A European Commission official said on Wednesday that the raids were part of efforts to cut continental dependence on Russian gas.

Gazprom sources suggested the EU was acting out of concern that progress on Russian pipeline projects would increase Moscow's share of European energy markets their dependence on Russia for energy imports.

Russia's underwater pipelines to Europe, including Nord Stream, which is set to start gas supplies to Germany next month, would increase Moscow's clout with Europe.

The links will plug the Russian gas system directly into the EU trunks and bypass transit countries such as Ukraine and Belarus.

Russia's failure to come to an agreement with Ukraine over prices recently has led to fresh worries of a new gas war, similar to the kind that cut off supplies to Europe in the past.

The comments from Turkey came as Gazprom speeds up its South Stream pipeline, which is designed to bring gas via Black Sea to Europe.

The EU is pushing forward with rival project Nabucco, which is supported by Turkish pipeline company Botas. Turkey so far has denied Russia approval to build the South Stream link in its territorial waters.

Rivalry over influence in the Caspian region, which could provide much of the throughput for alternative pipelines, flared earlier this month when the EU and Russia came to loggerheads over talks to build a pipeline across the Caspian Sea.

The 27-member bloc has agreed to kick off negotiations to secure a pipeline deal with Turkmenistan and Azerbaijan - two of the five states bordering the Caspian Sea - to allow gas from the region, which has the world's fourth-largest reserves, to flow directly to Europe.

The agreement would boost the Nabucco pipeline project to build a pipeline between Turkey and Austria. Russia said the EU should halt the talks.

Yildiz said Turkey was reevaluating contracts to make savings after seeing a 39 percent increase in natural gas prices in the past 29 months.

Turkey has take-or-pay contracts to buy up to 30 billion cubic metres of gas annually from Russia but has been buying less. Gazprom says it sold 18 bcm to Turkey last year.

This year, Turkish officials expect to take delivery of more than the 75 percent of the contracted amount of Russian gas to avoid take-or-pay penalties. One way to bring down that required amount is to cut contracts.

Turkey has already pressed Russia for discounts, but the two sides failed to reach an agreement in March when the subject came up during talks in Moscow between Prime Minister Tayyip Erdogan and Russian President Dmitry Medvedev.

Gazprom's export arm said on Thursday it was in talks with Botas, Turkish pipeline operator and gas importer, on supply contracts and that the Turkish Energy Ministry was not involved in negotiations.

"Gazprom Export has not received any information from its Turkish partner, Botas, on its position over prolonging the contract," Gazprom Export said in emailed comments.

If Botas does cancel the 6 bcm West pipeline contract, Turkish private sector firms are expected to sign deals for smaller amounts, taking the burden off the Turkish state sector.