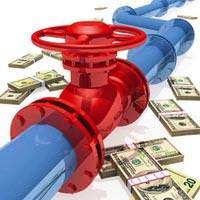 Russia's Gazprom is mulling new deals in Turkey after it received notification from Turkish state pipeline company Botaş that it had decided to end a contract to buy 6 billion cubic meters (bcm) of gas annually a source told Reuters.

"This could be less or more than 6 bcm. We already have some contracts with Turkish private firms," the source said.
"We received the notification from Botaş; they decided to end the deal. But Blue Stream supply contract remains in place," the source added.
Botaş decided to end the contract to receive gas via the so-called western line due to a pricing disagreement. The western line is one of the routes it uses to acquire the fuel from abroad. The contract was signed in 1986 and was due to expire later this year.
Mikhail Korchemkin of East European Gas Analysis believes that Ankara is adjusting its gas balance and the contract was surplus to requirements.
"A decade ago Turkey overestimated its natural gas demand and signed too many import contracts. Now Botaş is using its first opportunity to correct the gas balance," he said.
ATTACK ON GAZPROM
Last year, Gazprom supplied Turkey with 18 bcm of gas, of which 8 billion were shipped via the Blue Stream pipeline on the seabed of the Black Sea.
Korchemkin says Turkey might use Blue Stream with its capacity of up to 16 bcm to receive additional volumes within take-or-pay contracts with Gazprom.
"I think Blue Stream supply could rise to 11-12 bcm this year and 13-14 bcm in 2012," he said.
The decision by Botaş to end the deal comes as the European Union is intensifying its pressure on Gazprom, fearing that the Russian company will increase its influence in the EU by succeeding against rival EU-backed gas projects.
Last week, the EU's anti-monopoly authorities raided offices of Gazprom's subsidiaries in Europe in a wider probe into alleged breaches of anti-trust regulations.
European companies are increasingly dissatisfied with long-term gas supply contracts with Gazprom, demanding that the Russian company cut gas prices, which are linked to the price of oil and oil products.
Gazprom, Russia's largest company with a market capitalization of $113 billion is looking to increase its gas supplies to Europe this year by 12 percent to 155 billion cubic meters. It also eyeing a 30 percent share of the European gas market, up from around 25 percent now, in coming years.