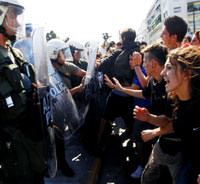 Greece will remain trapped in recession next year, threatening the country's efforts to cut deficits and claw its way out of a debt crisis shaking the euro zone, budget figures showed Monday.

The economy will suffer a fourth consecutive year of contraction, shrinking by 2.5 percent in 2012 after an expected 5.5 percent slump this year, according to the 2012 budget draft submitted to parliament after talks with international lenders.

The grim numbers are in line with recent forecasts by the IMF, but much worse than forecasts used in July to calculate a second, 109 billion euro rescue package which anticipated a return to 0.6 percent growth next year.

The government has admitted it will miss its budget targets for this year and decided on fresh austerity measures to meet a new, revised target for 2012. The budget plan predicts a deficit of 8.5 percent of gross domestic product for 2011, well off the 7.6 percent goal agreed with the European Union and IMF.

However, he warned that this year's shortfall could be still higher, at 9 percent of GDP, if citizens fail to comply with the extra measures, notably a new property tax which leftist parties have urged people not to pay.

"The 2012 budget completes an intense and difficult effort of fiscal adjustment, reaching a primary surplus of 3.2 billion euros in 2012 from a primary deficit of 24 billion in 2009," Venizelos said in a statement.

Analysts said that the 2011 budget slippage will complicate ongoing talks about the country's second bailout.

"In the political debate in Germany it will most likely be used as an argument to reopen the whole rescue package, asking private bondholders to make a bigger contribution," said Holger Schmieding, an economist at Berenberg Bank.

If Greece's international lenders, known as the troika, conclude in a report to be issued this month that recession will continue to be worse than predicted, EU officials have suggested that banks that agreed in July to write off 21 percent of the value of their Greek debt holdings may be forced to take deeper losses.

"It won't be easy for the German parliament to pass the second bailout in its current form," Schmieding said.

Greece's debt is expected to rise to nearly 173 percent of GDP next year from about 162 percent in 2011, the budget draft said. Growth is a key factor in determining whether this debt is sustainable or whether the country will have to default.

Tough new measures, including the property tax and public sector layoffs, are meant to narrow the budget gap to 6.8 percent of GDP in 2012, slightly higher than the 6.5 percent goal agreed with international inspectors in July, due to a deeper recession.

About 30,000 civil servants will be put in a so-called Labor Reserve, effectively a one-year waiting room for dismissal, on 60 percent of their salary. Greeks must also pay as much as 16 euros a year for each square meter of real estate they own.

Hundreds of demonstrators took again to the streets on Monday to protest against budget cuts and EU/IMF-imposed reforms to open up its sclerotic economy.

About 300 high-school students demonstrated outside parliament to oppose planned school mergers, a university reform and the austerity imposed on their parents.

"They should put themselves in our shoes and realize that they are killing our dreams," protester Jason Koumarianos, 16, told Reuters. "We have no future."

The jobless rate is expected to hit a record 16.4 percent in 2012 from 15.3 percent this year, according to the budget draft. Youth unemployment is more than twice the national average.

EU/IMF inspectors are still combing through public accounts and have not yet agreed to pay out a lifeline bailout tranche of 8 billion euros under the 110 billion euro rescue plan agreed last year.

In a meeting with Labor Minister George Koutroumanis, the inspectors raised the issue of lowering the minimum wage, currently at about 740 euros a month, to boost firms' competitiveness, a government official told Reuters.

The inspectors also visited opposition leader Antonis Samaras, whose anti-austerity stance has put his conservative New Democracy party ahead of the ruling Socialists by up to 6 points in the latest opinion polls.

No statements were made after the visit.