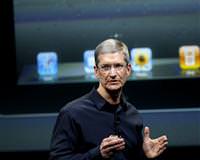 Apple Inc's newest iPhone left Wall Street and fans wishing for more than a souped-up version of last year's device, at a time when rival smartphone makers are nipping at its heels.

At his first major product launch since being crowned CEO, Tim Cook ceded the critical iPhone presentation to another executive, and failed to generate the same level of excitement and buzz that predecessor Steve Jobs was famous for.

The new iPhone 4S is identical in form to the previous model, disappointing fans who had hoped for a thinner, bigger-screened design. Apple's shares fell as much as 5 percent, before recovering with the broader market to close down 0.6 percent.

But analysts say the new device sported some new features, such as voice commands, to draw in consumers and is still going to be a big draw this holiday season, particularly as the phone is now available on Sprint's network in addition to AT&T nd Verizon Wireless.

It remains to be seen whether the iPhone 4S can stem market share gains by phones running Google Inc's Android software. Samsung Electronics, notably, is growing global shipments several times faster than Apple and is now estimated at within a hair's breadth of catching up in worldwide market share.

"It's been 16 months and all you've got is an A5 processor in the existing iPhone 4," BGC Partners' analyst Colin Gillis said of the new Apple phone. "It's a mild disappointment, but they're still going to be selling millions of units."

The iPhone 4S's voice commands -- for sending messages, searching for stock prices and other applications -- caught the attention of several analysts who argued it could profoundly change the user experience.

Known as "Siri", the technology already exists on Android but experts say Apple's integration was more fluid -- a hallmark of the company.

Whether such high-tech wizardry is enough to make the iPhone 4S a must-have in consumers' eyes and set it apart from the competition, remains to be seen.

"It's not clear that Siri is sufficient to make or break a purchase decision," said John Jackson, an analyst at CCS Insight. "It's a better mousetrap. History tells us users don't use this technology in great numbers." INTENSIFYING COMPETITION

While the iPhone 4S sports many of the features leaked in tech blogs before Tuesday, it lacked the "wow" factor that some were hoping for to sustain the popularity of the brand.

In some ways, Apple may have been a victim of past success. Product launches by Jobs, now chairman, had been some of the hottest events on the tech calendar.

The iPhone, which accounts for more than 40 percent of Apple's sales, has been a success since it came out in 2007, making Apple one of the world's top electronics companies.

Cook said Apple has made significant inroads into the corporate market, with more than 90 percent of Fortune 500 companies testing or using its iPhones and iPads. The news sent shares of BlackBerry maker RIM (RIMM.O) down nearly 3 percent at one point. Google shares finished 1.3 percent higher.

The iPhone 4S will cost $199 with pre-orders starting Oct. 7. Apple also cut the price of the older iPhone 4 to $99, and said an even older "3GS" model will be available for free to customers who sign a long-term contract.

That could help Apple expand into developing markets such as Asia, Samsung's backyard. And it might allow Apple to take a bite out of a low-end market it had eschewed.

"Apple is hitting Nokia when it's vulnerable. How many billions of people in emerging markets would love to have an iPhone? These are a growing demographic," said YCMNet Advisors CEO Michael Yoshikami.

Tuesday's iPhone event took place at Apple Central -- the same venue where the iPod was introduced years ago -- versus the larger, splashier venues of more recent choice, such as downtown San Francisco's Moscone center.

The event, though as usual choreographed to a tee, lacked the oomph and pizazz of Apple events in years past and sorely missed the star power that Jobs brought to the unveilings.

Heading into the event, many on Wall Street had questioned Cook's ability to lead the company as Jobs had. In terms of stage presence, Jobs was a tough act to follow.

While it did little to alleviate concerns about whether the company would stay a creative force to be reckoned with without its founder and visionary at the helm, analysts say Tuesday's proceedings hinted at Apple's new team-based approach.

"What he did is let the team shine through," said Forrester Research analyst Frank Gillett. "What we may see is a somewhat different style, and frankly a healthy style that says: Look, this is a team that works together, there's a deep bench, it's not just one person."

Twitter users were not impressed with the phone, though.

"Please note I will be selling some 'S' stickers for $0.99 so iPhone 4 owners have a cheaper upgrade option," wrote HAL9000 on Twitter.

Tomlinsonr tweeted, "I'll have a double helping of 'meh' with a side of 'whatever'."

The latest version of the iPhone comes as the economy slows and competition intensifies. People activate more than 550,000 Android-based devices -- including tablets -- each day.

Nielsen data shows the iPhone was No. 2 in the United States with a 28 percent market share, with Android at 43 percent.

Despite disappointment online, analysts said the phone is superior to many rival offerings.

"Voice recognition has been on Google and Blackberry devices for years, but Apple will make it much more usable," said Morgan Keegan analyst Tavis McCourt.