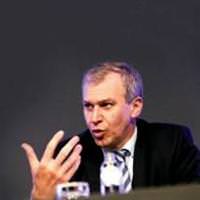 Franco-Belgian bank Dexia was set to be broken up and partly nationalised after being slammed by a funding squeeze in the latest warning sign about the health of Europe's struggling lenders.

The rescue of Dexia, which has global credit risk exposure of $700 billion -- more than twice Greece's GDP -- came as the leaders of French and Germany agreed in a joint press conference that European banks needed to be recapitalised, but papered over differences on how that would happen.

Details of the rescue were not revealed while Dexia's board met in Brussels to approve the plan, but it will call for the bank's Belgian retail unit and French municipal finance operations to come under government control.

Dexia was forced to seek state help for the second time in three years after a liquidity crunch hobbled the lender and sent its shares down 42 percent over the past week.

"The three governments have agreed to put a proposal to the board which fits completely with the goals of the Belgian government, which means to take over Dexia Bank Belgium, secure it and turn it into a very safe bank," Leterme said after two hours of talks at Egmont Palace in Brussels -- also the site of negotiations for a previous Dexia rescue in 2008.

At stake in the talks is how much each government will have to contribute to help wind down Dexia, a thorny subject given that Belgium and France are already struggling to contain large deficits.

The need to recapitalise banks is emerging as another strain for European governments whose budgets are already stretched. Belgium had a debt-to-gross domestic product ratio of 96.2 percent last year, lower only than Greece and Italy among euro zone members and on a par with bailout recipient Ireland.

"I am convinced that it is possible ... by tomorrow morning to have an agreement in which Belgium resolves the issue without pushing up the debt level of our country too high," Leterme told Belgian television before Sunday's talks.

The burden of bailing out Dexia led ratings agency Moody's to warn Belgium late on Friday that its Aa1 government bond ratings may fall.

Dexia, which used short-term funding to finance long-term lendings, has found credit drying up as the euro zone debt crisis worsened. This problem has been exacerbated by the bank's heavy exposure to Greece.

Dexia's near collapse stoked investors' anxieties about the strength of European banks and coincided with growing talk about coordinated EU action to recapitalise banks across the continent.

Germany and France have so far been split over how to recapitalise shaky European banks. Paris wants to tap the euro zone's 440 billion euro ($594 billion) European Financial Stability Facility (EFSF) to recapitalise French banks, while Berlin is insisting the fund should be used as a last resort.

There were fresh reports over the weekend that France's top banks BNP Paribas and Societe Generale could agree to capital injections as part of a Europe-wide plan to boost lenders' financial strength, although both banks continue to deny such plans.

The Belgian government will nationalise Dexia's largely retail banking business in Belgium. Media reports said it would have to pay 4 billion euros to do so.

Healthy units, such as Denizbank in Turkey, will be sold.

Including 7 billion euros of securities linked to U.S. mortgages, France and Belgium may need to provide guarantees to cover up to 200 billion euros of assets, which would be more than 55 percent of Belgian GDP. Belgium, under an agreement reached between the governments on Sunday, will guarantee 60 percent of the bad assets while France will be responsible for most of the rest, sources familiar with the talks said.

The key issues are how to divide up the 'bad bank' asset guarantees, how much Belgium should pay to nationalise Dexia's Belgian banking business and whether others, such as Belgium's regions, would be involved in its purchase.

Dexia's shares have been suspended since Thursday afternoon.