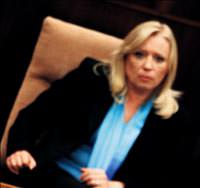 The parliament of tiny Slovakia stalled the expansion of a bailout fund to rescue the euro zone from its debt crisis on Tuesday, but international lenders said they were likely to grant a loan to Greece next month, buying time for a broader response.

Slovakia is the only country in the 17-member currency zone that has yet to approve giving new powers to the European Financial Stability Fund. The expansion was agreed by euro zone leaders in July but must be ratified by each country.

The EFSF is Europe's main weapon to respond to a debt crisis that threatens the European common currency, the region's banks and potentially the global financial system.

The government of Slovak Prime Minister Iveta Radicova fell on Tuesday after a small party in her ruling coalition refused to back the plans. The outgoing government still expects to be able to enact the measure as a caretaker administration by the end of this week with support from an opposition party.

"There is an assumption that the EFSF, one way or the other, will be approved by the end of the week," Finance Minister Ivan Miklos told parliament ahead of the vote.

The failure in the Slovak parliament underlines the difficulty of forging a united response to the worsening debt crisis in a currency zone where all 17 member states must act in concert, and voters are increasingly angry at the growing costs.

Leaders are struggling to find a response that would protect euro zone banks if Greece defaults on its debts.

For now, Athens needs an immediate infusion of cash within weeks just to meet state payrolls. A loan programme has been held up while the European Union and IMF assess whether Greece is doing enough to get its finances in order.

After a weeks-long review of Greece's finances, inspectors from the European Union, IMF and European Central Bank, known as the troika, said an 8 billion euro loan tranche should be paid in early November. It still requires approval by euro zone finance ministers and the IMF.

The troika warned that Greece had made only patchy progress in meeting the terms of a bailout agreed in May last year.

"It is essential that the authorities put more emphasis on structural reforms in the public sector and the economy more broadly," the troika said in a statement.

It said additional measures were likely to be needed to meet debt targets in 2013 and 2014, and a privatization drive and structural reforms were falling short.

Germany, the euro zone's biggest economy, said a decision on whether to make the aid payment was still open.

"We'll wait and look at the report, analyze it and then decide what will happen with the sixth tranche."

That money would anyway only buy Greece and its euro zone partners a small amount of time.

Germany and France, the leading powers in the 17-nation euro zone, have promised to propose a comprehensive strategy to fight the debt crisis at an EU summit delayed until October 23.

After Athens admitted it would not meet its deficit target this year, there is a growing acceptance that a second Greek bailout agreed in July with private bondholders' participation may need to be renegotiated. A rush is now on to beef up the currency bloc's rescue fund and bolster its banks.

Trichet issued the dramatic warning as chairman of the European Systemic Risk Board, created to avoid a repeat of the 2008 financial crisis, amid growing fears that Greece will default on its massive debt.

"The crisis is systemic and must be tackled decisively," Trichet told a European Parliament committee in his final appearance before retiring at the end of the month.

"The high interconnectedness in the EU financial system has led to a rapidly rising risk of significant contagion. It threatens financial stability in the EU as a whole and adversely impacts the real economy in Europe and beyond."

European banking regulators meanwhile asked banks across the continent to provide updated data on their capital position and sovereign debt exposures to help reassess their need for recapitalization.

European Commission President Jose Manuel Barroso said the EU executive would present proposals for bank recapitalization and other aspects of the crisis response on Wednesday.

Industry sources said the EU banking regulator had demanded lenders achieve a core capital ratio of at least 7 percent in a new round of internal stress tests, and banks that failed to reach that mark would be asked to bolster their capital.

That would mean some 48 banks would be required to raise a total of 99 billion euros in capital, according to a Reuters Breakingviews calculator using data from previous stress tests. Greek banks would need nearly a third of the total.

For a comprehensive deal to come together, the bloc's leaders must resolve differences over how to recapitalize banks, whether to force a Greek debt restructuring or stick to the existing voluntary deal with private bondholders, and how to use the euro zone's rescue fund.

Europe's inability to draw a line under the crisis has caused growing international alarm, with Japan weighing in on Tuesday after the United States and Britain pressed EU leaders to take decisive action.

Tokyo said it would consult with Washington before it considers buying more euro zone bonds. Finance Minister Jun Azumi urged Europe to restore market confidence in the run-up to a Group of 20 finance leaders' meeting in Paris this week.

Interbank lending rates in Europe continued to rise amid growing concern over European banks' ability to operate, despite the prospect of massive ECB liquidity support.

Some European banks voiced concern at the prospect of being forced by governments to raise additional capital that some say they do not need, possibly by taking public money. One senior banker said that could lead to legal challenges in Germany.

Germany's BDB banking association said Europe should look at recapitalization on a case-by-case basis rather than taking a blanket approach apparently envisaged by Berlin and Paris.

The director of the association, Michael Kemmer, also told ARD television that politicians should stick to a July agreement on private bondholder involvement in a rescue plan for Greece, which called for a 21 percent writedown.

German Finance Minister Wolfgang Schaeuble and the chairman of euro group finance ministers, Jean-Claude Juncker, have said that figure may no longer be sufficient and the talks may have to be reopened.

Speaking on Austrian television late on Monday, Juncker refused to rule out a mandatory debt restructuring for Greece, which many market analysts and economists say is bound to happen in the coming months. Many analysts see the rush to recapitalize European banks as a prelude to an enforced write-down of 50 percent or more on their Greek debt holdings.