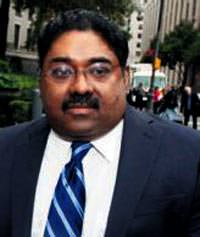 Raj Rajaratnam, a self-made hedge fund tycoon convicted in the biggest Wall Street trading scandal in a generation, was ordered to serve 11 years in prison, the longest sentence ever in an insider-trading case but far less than prosecutors sought.

Thursday's sentencing caps a prosecution, marked by secret wiretaps of Rajaratnam and his associates, that shocked the investment world. The Sri Lanka-born fund manager once stood atop a $7 billion New York hedge fund, but was found guilty of running a network of informants who supplied him with corporate secrets.

The sentence was lighter than the 19-1/2 year minimum term that prosecutors had sought, and was only slightly more than the 10 years handed down recently to a former Rajaratnam employee at the now-shuttered Galleon Group hedge fund.

The judge, in rejecting calls for a tougher sentence, said Rajaratnam, 54, faces "imminent kidney failure" due to advanced diabetes. He referred to a report from the defense describing Rajaratnam's doctors as recommending dialysis soon. The report said the doctors had begun the process for obtaining a kidney transplant.

"Prison creates a more intense form of punishment for critically ill prisoners," U.S. District Judge Richard Holwell said. He added, however, that illness does not provide "a get-out-of-jail-free card."

The judge also cited the multimillionaire's charitable work including helping victims of natural disasters in Sri Lanka, Pakistan and in the United States.

Rajaratnam, standing with his lawyers and looking straight ahead, was expressionless after hearing the sentence. Before the judge announced his ruling, Rajaratnam said "No thank you, Your Honor," when asked if he wanted to make a statement.

Rajaratnam's lawyers, whose client showed no obvious signs of poor health during the 80-minute hearing on Thursday, have said that a long prison term would amount to a death sentence.

The judge granted Rajaratnam's request to recommend he be sent to a prison in Butner, North Carolina, best known for housing Ponzi scheme operator Bernard Madoff, who is serving a life term. The prison, whose inmates range from white-collar offenders to child molesters and gang members, has a hospital.

Rajaratnam was the key figure of a sprawling criminal case, unveiled in October 2009, that touched some of America's top companies, including Goldman Sachs Group Inc, Intel Corp, IBM and the elite McKinsey & Co consultancy.

Prosecutors have placed him in a dubious pantheon of Wall Street power players such as takeover specialist Ivan Boesky and junk bond financier Michael Milken, principal figures in a mid-1980s insider-trading case. Both men served about two years in prison.

Holwell also decried Rajaratnam's offenses, saying "the government is absolutely correct that insider trading is an assault on the free markets that are a fundamental element of our democratic society."

Rajaratnam was ordered to surrender on November 28. The judge rejected his request to remain under house arrest at his luxury Manhattan apartment while he pursues an appeal over the legality of the wiretaps.

Federal inmates typically must serve at least 85 percent of their terms before being eligible for release.

Rajaratnam's wife, Asha, who has never attended court in the two years since his arrest, sat in the third row of the courtroom's public seats while the judge imposed sentence.

Rajaratnam was convicted in May on 14 charges of securities fraud and conspiracy. He did not testify in his own defense at his two-month trial, but his voice was heard repeatedly on the 45 recorded phone calls played for the jury.

The judge also fined him $10 million and ordered him to forfeit $53.8 million, which Holwell said approximated the illegal profits and avoided losses from the trading scheme.

The Galleon case sent shock waves through Wall Street and the hedge fund industry, where traders can try to get an edge at all costs. Prosecutors say Rajaratnam and others crossed the line by pumping corporate insiders for corporate earnings or details of mergers that had not yet been announced.

The investigation featured extensive use of secret FBI phone taps. Such tactics usually are reserved for Mafia and drug trafficking investigations.

The case has been a major victory for the Justice Department. Out of 26 people, including traders, lawyers, executives and consultants charged in the case, 25 have pleaded guilty or were convicted at trial of supplying or trading on illicit stock tips. One is at large.

"We can only hope that this case will be the wake-up call we said it should be when Mr. Rajaratnam was arrested," Manhattan U.S. Attorney Preet Bharara said in a statement.

One conspirator caught on the phone taps was Danielle Chiesi, a former high school beauty queen who became a hedge fund trader at New Castle Funds.

"They're gonna guide down," Chiesi told Rajaratnam on a July 24, 2008 recording of them discussing Akamai Technologies Inc's full-year outlook. "I just got a call from my guy. I played him like a finely tuned piano."

At the trial, several of Rajaratnam's former friends and associates, including former McKinsey consultant Anil Kumar and former Intel executive Rajiv Goel, testified against him.

Goldman Chief Executive Lloyd Blankfein also testified that disclosure of boardroom talks to Rajaratnam by a Goldman board member went against the bank's confidentiality policies.

Insider-trading defendants often get sentences lower than what is prescribed in federal guidelines, out of the view that their crime is less harmful than other types of misdeeds.

"I think it's a fair sentence," said Thomas Dewey, a defense attorney at law firm Dewey Pegno & Kramarsky. The judge "balanced the seriousness of the crime and the need for deterrence with his medical issues and the good works Raj has done to come out at the right place."

Rajaratnam founded Galleon in 1997 and built it into one of the world's largest hedge funds. Galleon made all of its investors whole when it was wound down after his arrest.