Where does Turkey place in a list of the world’s population? 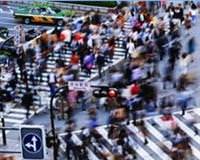 In this world where 258 babies are born each minute, the population is nearing seven billion. It is yet unforeseeable how living conditions may change with the increasing global population.

Every minute, 258 babies are born in this world. According to calculations the world population may reach seven billion by the end of this month.
Drawing attention to the fact that the most recent increase of a billion in population transpired over the past 13 years, specialists are expressing concern over the problems that could develop as a result of this continued increase. The population is anticipated to reach eight billion by 2025.
The most crowded three countries…

China, India and the United States of America are the three most crowded countries. In China alone, the one billion, 340 million population accounts for one fifth of the entire world's population.
In China, the number of births is decreasing however the balance has also been rocked…
China has successfully reined in the growing population which resulted in a cheap labor force, by issuing a single child birthing policy. The number of births is decreasing; however this has also resulted in a number of issues including disrupting the male-female balance in the nation.

India's one billion, 200 million population is fast on the rise.

Known as the country of emigrants, the population structure of the United States, currently at 310 million is growing in ethnic groups' favor.

ELDERLY POPULATION PROBLEM ON THE RISE
In developed regions such as Russia, Japan and Europe the lower number of births contributes to the drop in population, however it is then that the issues surrounding an increasing elderly population arises.

With life spans continuously increasing, the world's elderly population is reaching unprecedented numbers. Japan is one of the world's fastest aging nations.

Japanese families tend to have pets versus children. Out of 41 of the world's nations with the highest elderly population, 32 countries are European countries.

With a population of 72 million, Turkey is 17th in terms highest populated nations.