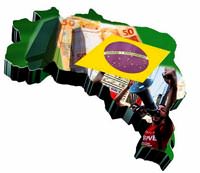 Brazil's economy is on pace to grow about 3.5 percent this year, and inflation is expected to reach 6.52 percent, just above the 6.5 percent ceiling the government set for inflation.

Markets had priced in a rate cut ahead of the central bank's meeting on Wednesday, and Wall Street investors positioned themselves accordingly. Even so, large emerging markets like Brazil remain a destination for U.S. investors looking for higher-yielding returns.

Retailers, auto financing companies and homebuilders profit from consumer debt. A rate cut lowers the cost of borrowing for consumers, making it more likely they will buy more and do so on credit. That, in turn, spurs corporate profits.

Among them: Companhia Brasileira De Distribuicao, better known as Pao de Acucar, is a growing food and clothing retailer that recently acquired a chain of home appliance retailers. The company appeals to a broad swath of consumers, and new loans could boost revenue and earnings for the company, said Michael Reynal, portfolio manager of the $1.7 billion in the Principal International Emerging Markets fund at Principal Global Equities.

Companies that finance bigger purchases offer another window to consumers. "Banks are pretty aggressive lenders in the auto financing," said Reynal, adding that Itau Unibanco Holding SA and Banco do Brasil are two banks that are active in such lending.

Share prices at homebuilders like Gafisa SA typically rise when interest rates fall. Construction is already surging in Brazil as the country prepares to host the 2014 FIFA World Cup and the 2016 summer Olympics. Rossi Residencial SA, is another builder Reynal suggests.

Living standards in Brazil and other parts of Latin America are already increasing. As inflation eases and Brazil's economy stabilizes, this trend should continue. The middle class is already growing as lower-wage earners move up. One result: a larger swath of consumers who are buying higher-quality products and more nutritious food.

Clothing firm Hering SA is well-positioned to reach an expanding middle class. The company is opening stores in mid-sized cities, opening a new channel to a part of the "population that previously didn't have access to credit and... to consumption," said Weyman Gong, chief investment strategist at Signature, which manages $2.5 billion in assets.

What's more, the company draws 48 percent of its revenue from products it exports, so "a depreciated real would benefit the company's export market," Gong said.

Bulking up on local corporate debt and limiting Brazilian government bond holdings is a key play.

State-owned utility Sabesp, which provides water and sewage services in the state of Sao Paulo, is one good corporate bond play. Utility companies tend to be a safe investment that provide good returns and perform well when rates are cut, said Michael Roche, emerging markets debt strategist at MF Global.

Another bond wrinkle: a curve-steepener strategy where investors sell long-maturity bond and buy short-dated notes to get the benefit of a rising yield difference.

The upshot: An investor "would profit from the longer term interest rates falling less fast than the short-term rate," Roche added.