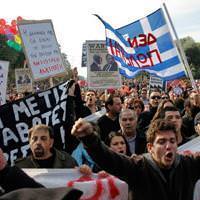 The leaders of France and Germany scrambled on Tuesday to limit damage after Prime Minister George Papandreou decided to let Greeks vote on a bailout package -- a move that stunned markets and threw Greece's euro zone membership into question.

European politicians complained Athens was trying to wriggle out of the 130 billion-euro (111 billion-pound) rescue deal agreed at a summit only last week, concerned not so much about the fate of Greece as the possibly dire consequences for the entire currency union of the referendum.

Ireland, which itself took a bailout, attacked Papandreou's idea.

"The summit last week was to deal with the uncertainty in the euro zone...and this grenade is thrown in just a few short days later," European affairs minister Lucinda Creighton said.

"Legitimately there is going to be a lot of annoyance about it," she told Reuters.

French President Nicolas Sarkozy will call German Chancellor Angela Merkel on Tuesday, his office said, while emotions ran high in Greece itself about the referendum idea.

"They must be crazy... this is no way to run a country," said the senior executive of one of Greece's biggest firms, speaking on condition of anonymity.

One senior German parliamentarian suggested the euro zone might cast Athens adrift, cutting off its aid lifeline and allowing the nation to default on its huge debts.

"This sounds to me like someone is trying to wriggle out of what was agreed -- a strange thing to do," said Rainer Bruederle, a leader in Merkel's coalition.

Bruederle, parliamentary floor leader for the Free Democrats and a former German economy minister, said he was irritated by Papandreou's announcement.

Europe would have to consider turning off the flow of money which is keeping Greece afloat, he told Deutschlandfunk radio.

"One can only do one thing: make the preparations for the eventuality that there is a state insolvency in Greece and if it doesn't fulfil the agreements, then the point will have been reached where the money is turned off," he said.

Others were stunned by Papandreou's apparent bolt from the blue on Monday on the plan, which includes a 50-percent write-down on Greece's debts but has unleashed fury among Greeks due to its price -- yet more austerity.

But they also urged caution as the exact question to be put to the Greek people and the date for the vote remains unknown. EU officials had yet to be officially notified of the poll.

On the markets, players scurried for safer investments, hammering stocks and punishing the euro.

"The referendum is a bad idea with a bad timing. The post-summit rally is over," said Lionel Jardin, head of institutional sales at Assya Capital, in Paris.

The FTSEurofirst 300 index of top European shares was down 3.3 percent, due not only to the possibility of a disorderly Greek default but chaos surrounding the euro zone's attempts to stop the debt crisis spreading to more significant economies such as Italy.

Andrew Lim, banking analyst at Espirito Santo in London, said that a Greek "no" vote could trigger a "hard default," forcing banks to take losses of about 75 percent on their Greek sovereign bonds and raising the threat of a systemic risk.

"If we get a hard default in Greece, it will exacerbate the situation with Italy and Spain. It just increases the problem of Italy going down the same route, and that's the real risk," Lim said.

Investors sold off bonds issued by Italy and Spain -- two major economies with debt problems which would be much tougher to rescue than Greece, one of the euro zone's smallest members.

Traders said that prompted the ECB to step in and buy the bonds of both countries as implied Italian borrowing costs hit a three month high around 6.26 percent.

On currency markets, the euro fell over one percent versus the dollar and yen. "The Greek referendum is a real curve ball. Nobody saw it coming and it injects a lot of uncertainty," said Steven Saywell, head of FX strategy at BNP Paribas.

"He cannot govern and instead of withdrawing honourably, he dynamites everything," he said.

Germans on the streets of Berlin expressed exasperation with the entire euro project.

"All I understand is that the Greeks keep causing us problems. We'd be better off without the euro," said Bert Kuehn as he delivered rolls to a bakery.

Some politicians urged caution as so much remains uncertain in the fluid world of Greek politics.

"For the moment we must be prudent and wait to see what Papandreou says before the full parliamentary session to explain the exact reach of his proposal," Spanish Secretary of State for the EU, Diego Lopez Garrido, told Cadena Ser Radio.

Papandreou, whose ruling Socialist party has suffered several defections as it pushes waves of austerity measures through parliament while protesters rally outside, said he needed wider political backing for the fiscal measures and structural reforms demanded by international lenders.

Analysts said the latest opinion poll showed a majority of Greeks took a negative view of the bailout deal.

The renewed uncertainty is likely to be an embarrassment for G20 leaders meeting in France this week trying to coax China into throwing the euro zone a financial lifeline.

"It is difficult to predict what will happen to Greece if they reject it. It will be bad enough for the European Union and the euro zone in particular, but it will be far worse for Greece.

"In the scenario of a 'No' vote Greece would declare bankruptcy immediately, they would default immediately. I can't see them staying within the euro," he said.

"It's crunch time," he said on Monday. "Citizens will have to answer the question: are we for Europe, the euro zone and the euro?"

Venizelos told Greek TV the referendum would probably be held early next year.

Papandreou also said he would ask for a vote of confidence to secure support for his policy for the rest of his four-year term, which expires in 2013.

Analysts said he was likely to win that, despite dissent among his parliamentary team, and parliament officials said the confidence debate would begin on Wednesday, with a vote on Thursday or Friday.

Greece is due to receive an 8 billion-euro tranche in mid-November, but that is likely to run out during January, around the time of the referendum, leaving the government with no funds if there is a "no" vote.

A survey carried out on Saturday showed that nearly 60 percent of Greeks viewed the agreement on the bailout package as negative or probably negative.

But David Lea of Control Risks struck a more positive note. "It's all in the question. If he can frame it as a sufficiently apple-pie issue, he stands some chance of winning," he said.