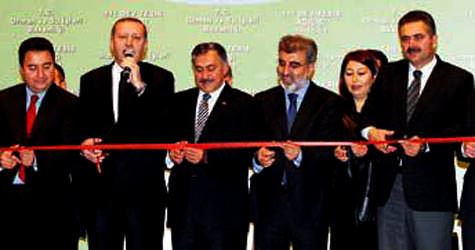 On November 11th, 2011, or 11/11/11, Prime Minister Erdoğan conducted the opening of 8.3 billion worth of investments to service. Amongst just some of the facilities opened on this unique date, 7.1 billion kilowatt hour electricity will be produced, 721,000 decares of agricultural fields will be irrigated. Annually, 124 million cubic meters of water will be procured and two provinces and 16 counties will be protected from over flooding.

On 11/11/11, the government opened 111 new facilities throughout the country, spanning from Artvin to Tekirdağ, Sinop to Mersin and Rize to Çanakkale. Amongst the 8.3 billion in investments, were five dams, 48 hydroelectric power stations, reclamation planning and over flooding protection facilities for 12 creeks, 5 ponds, 11 irrigation facilities, 10 drinking water facilities, three meteorological radars, five observation stations, six urban forests and six national parks. Speaking at the opening ceremony, Prime Minister Recep Tayyip Erdoğan stated. "We will be producing seven billion, 100 million kilowatt hours of electricity. We will be irrigating 721,000 decares of agricultural fields. We will also be supplying 124 million cubic meters of water, including drinking water. We will be setting up protective measures for over flooding in two provinces, 16 counties and 43 villages. We will be providing our cities with areas of greenery, promenades and will also ensure our farmers are given more exact weather forecasts."
'IN NINE YEARS WE HAVE MADE 991 FACILITIES'
Mentioning that the ruling government prior to the AK Party had set up nine different facilities over three years time, however the current government has now completed 991 facilities over the past nine years, Prime minister Erdoğan stated, "On top of that, do you know how it is we did this? Before us, the share acquired from the budget by the DSİ (State Waterworks) was 3.5 percent and the investment budget share was 44 percent. We dropped these rates. The share allotted from the budget is two percent and the investment share is 24 percent. The rate of investments however is higher compared to the past. We have not come on to reap from the state's assets, we have come to serve."
'We are not abandoning any precautions against the global crisis.'
Touching on the global crisis, Prime Minister Erdoğan also stated, "We never release our grip on precautionary measures against global risks. It is due to this that Turkey is now in a very different place and position in the world. Turkey is pointed to at the G-20 Summit, by the OECD and in Europe as well as in Asia."

Water to flow in Cyprus in 2014
Explaining that they have solved the water issue in Izmir and Ankara up until 2050, Prime Minister Erdoğan also inferred that the water issue in Northern Cyprus would also be remedied by stating, "We have laid the foundations and the work is ongoing. Hopefully on March 7th, 2014 at 13:00, we will be providing water from the homeland to the Turkish Republic of Northern Cyprus."