Ankara to get a 200 million Euro mall 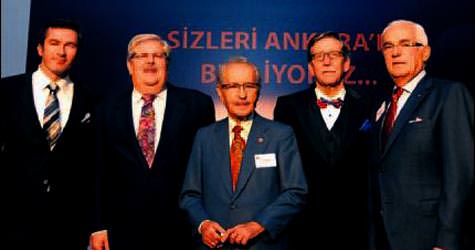 Taurus Ankara, the first shopping center that Ziraat Bank has offered credit for, will soon be materializing with a 200 million euro investment. The mall, which also marks the first investment by the Ensari family and is the largest investment made in Turkey by the United States’ Taurus.

The USA's Taurus Investment Holdings and the Ensari family have joined forces for the Taurus Ankara Shopping Center, which is coming to life with a 200 million euro investment. The project involves a number of interested parties. Not only is the Taurus the first shopping center project that Ziraat Bank has offered credit for, but it is also the first mall investment project that Ankara's Ensari family has embarked upon. The project, which is the U.S. investment company Taurus Investments' largest investment in Turkey, is anticipated to officially open in the first quarter of 2013.
"IT WAS TOUGH CONVINCING THE BANK"
Taurus Eurasia management partner Ertan Dal, explains that it was very difficult to convince a large bank such as Ziraat Bank on the project, which foresees providing 1,500 job opportunities. "This is the first loan Ziraat has granted for a shopping center project. Following an extended process on establishing the project, the bank decided that the project was indeed feasible." Explaining that Taurus Investments, which has been operating in Turkey for five years now, also has plans to conduct shopping center investments in Istanbul, Izmir, Antalya and Adana, Dal states," We foresee conducting an approximately 400 million dollar investment." Mentioning that Turkish investors perceive selling land as a commercial weakness, Dal states, "They prefer to add value to the land and to build a shopping center for prestige." Dal also noted that the next ten years will be the stage for projects done with equity capital.