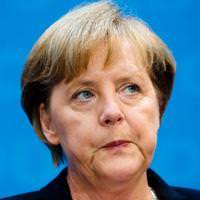 A week before European leaders meet in Brussels for what is being seen as a make-or-break summit for the 13-year-old single currency bloc, Merkel once again rejected the idea of joint euro zone bonds and cautioned against steps that might hurt the credibility of the European Central Bank.

"The government has made clear that the European debt crisis can't be solved in one fell swoop overnight. There is no miracle solution. There is no easy, rapid solution," Merkel told parliament. "Resolving the sovereign debt crisis is a process and this process will take years."

She is under growing pressure to take bolder steps to resolve a crisis that has spread like a virus from Greece, Portugal and Ireland to the very core of Europe, raising questions about whether the bloc can survive intact.

Merkel likened the battle to contain the crisis to a marathon, warning Europe against speeding from the start line with measures that would come back to haunt it before the finish line was reached.

"Marathon runners often say that the run becomes especially difficult at the 35 kilometre mark, but they also say that reaching the finish line is possible if you are conscious of the full challenge from the very start and approach it accordingly," Merkel told lawmakers in the Bundestag lower house.

"The one who starts fastest isn't necessarily the most successful. It is the one who is aware of what is involved in running the full distance."

Merkel spoke a day after French President Nicolas Sarkozy backed her push for stricter coordination of national budgets but warned against handing over control to a supra-national body in Brussels. "The reform of Europe is not a march towards supra-nationality," Sarkozy said in the French city of Toulon.

Merkel called joint euro bonds "pointless" and said people who were calling for them as a remedy have "not understood the nature of the crisis".

Criticising politicians for failing to ensure the bloc's fiscal rules, enshrined in the Stability and Growth Pact, she said there was no alternative but to agree new tougher guidelines and set them in stone.

"There is no way around changing the European treaties, or as a second-best option agreeing new treaties. We are going to Brussels with the target of pushing through treaty changes. That is with the spirit of wanting to avoid a division of euro countries and non-euro member states."

Frank-Walter Steinmeier, parliamentary leader for the opposition Social Democrats (SPD), slammed Merkel's handling of the crisis in a speech to the Bundestag after she spoke.

"No one, Frau Merkel, blames you for the crisis. But how you've handled it is a scandal," said Steinmeier, who lost to Merkel in a 2009 election.

"In daylight hours you criticise those European countries that want to ECB to come to the rescue. When it turns dark, you pray that the ECB will continue to buy up bonds."