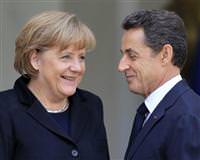 France and Germany have agreed on a series of reforms to address the euro zone sovereign debt crisis that will be presented to EU President Herman Van Rompuy on Wednesday, French President Nicolas Sarkozy said after a meeting with German Chancellor Angela Merkel on Monday.

"We want to make sure that the imbalances which led to the situation in the euro zone today cannot happen again," Sarkozy told a news conference.

"Therefore we want a new treaty, to make clear to the peoples of Europe, members of Europe and members of the euro zone, that things cannot continue as they are," he added.

Sarkozy said that the new proposals would include a modified EU treaty, ideally for all 27 EU members, but that they were also ready to draw up a treaty for the 17 euro zone members though this would be open to others.

This treaty would include automatic sanctions for states who fail to meet the 3 percent deficit rule, as well as a budget-balancing rule across the euro zone.