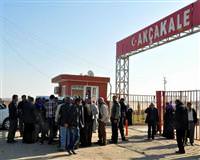 Syria has closed the Tellebyat border gate to trade and has expressed that border trade with Turkey has been put on hold.

Truckers carrying loads of cement to Syria were turned back at the Akçakale border gate signaling that border trade has been halted by Syria. Supposedly, individuals are still being allowed to cross the border as usual. Truckers have had to turn back ever since this morning due to the closing of the border gate. It turns out, that after the Ministry of Customs announced the nine item sanctions to be implemented against Syrian, Syria in turn closed their doors to trade, turning back Turkish lorries.
Company owners and drivers reacting to the closing of the border with Syria to trade stated, "The Southeastern Anatolian public will pay the heaviest price," as they called on Turkish officials to find a more rational and peaceful solution.
Dehem Gündoğdu, the owner of one of the companies previously engaged in border trade with Syria states, "At present, the Akçakale border gate has been closed. Our Ministry of Customs has announced that the nine-item sanctions implemented against Syria are the reason behind this action. Previously, we had good relations with Syria and it was bringing in good money. Due to these relations, both our people and our government were making good revenue. However, now relations have been broken and they have begun to react harshly to us. When our Prime Minister was helping them, relations were just fine however, now they are reactive towards us. Syria has no investments in Turkey; yet we have a lot in Syria. What has happened, has happened to Turkish investors, Ninety-percent of the investments we made in Syria are about to crumble. Whichever border we turn to now, Iran or Iraq is the same. Syria is the closest border for us. Our request from our authorities is for the process if possible to be done through slightly more peaceful and diplomatic ways. The announcements made have resulted in harming us. We have debts to cooperatives to banks and behind all of this are sequesters. There are drivers working through this border, basically there are a lot of people and clerks that benefit from this border gate for 50 kilometers."