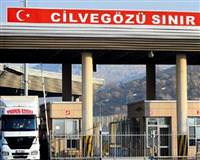 Turkey will impose a 30 percent tariff on all Syrian goods, Minister of Trade Hayati Yazıcı was quoted as saying on Wednesday, in apparent retaliation for a similar tax imposed on Turkish goods by Damascus.

"We will place a 30 percent tax on all goods coming from Syria," Customs and Trade Minister Hayati Yazıcı stated.

Yazıcı also stated that all vehicles over 20 years old would not be allowed entry. Yazıcı also noted that the 30 percent tariff would be equivalent to that issued by Syria.
Yazıcı expressed that they are currently working on creating alternative routes to the Gulf nations.
"One of these options is to begin a Ro-Ro service." Yazıcı also stated that as their free trade agreement with Syria has been put on hold; they are continuing to work on the option of lifting the discounted or zero customs tariffs.