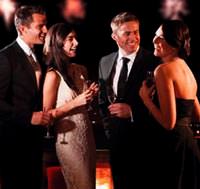 Istanbul’s five-star hotels have guaranteed full occupancy for two weeks in the holiday season. While it is already trying to find accommodation in the city, just to attend a New Year’s party could cost up to 750 TL.

Those who spent last New Year's Eve celebrating at home have gone to the other spectrum and appear to be planning to usher in the New Year in five star hotels. Interest in New Year's Eve programs set up by five star hotels in Istanbul as well as in the nation's other big cities has already surpassed that of last year. According to Mövenpick Hotel's Corporate Communications Director Buket Oğuz, in addition to the demand for New Year's Eve dinners and parties, they are also seeing an increase in numbers of Istanbul residents who want to check in to a hotel room for the night. Oğuz also shared tha the Hilton Group hotels is also experiencing an increased interest in accommodation packages compared to demand for solely the evening's festivities. Meanwhile, five-star hotels have set prices high, with cocktails starting at 69 TL, and dinners priced between 295 and 350 TL. Accommodation packages have gone up to 750 TL for two.
CHILDREN'S PARTY FOR 85 TL
This year, hotels have not overlooked providing options for families with young children. All five-star hotels will be offering special parties geared towards children to ensure they are not left out as their parents have their own fun. The children's' parties will also offer beds for those who get tired early. The price for a ticket to the children's party geared for kids ages 5-12 and held at the Hilton starts at 85 TL and includes a clown show, face painting, animated videos and an open buffet children's menu. At the kids' ball to be held at the Elite World Hotel, which will include activities such as an animated film showing, tickets cost 55 TL.
Ball entrance fee starts at 295 TL
Tickets for Mövenpıck Hotel's New Year's Eve Ball start at 295 TL including VAT. Tickets for Hilton's Istanbul Hotel Terrace Restaurant include unlimited domestic drinks and also start at 295 TL. Tickets for the New Year's Eve gala dinner start at 395 TL per person. The lowest price for a ticket to the Conrad Istanbul Hotel New Year's Eve program, which kicks off with a cocktail party, is 375 TL. The New Year's Eve party at the Grand Hyatt Hotel starts at 350 TL including VAT and unlimited domestic drinks. At the Crowne Plaza Istanbul Asia Hotel, New Year's Eve package prices start at 49 Euros. Accommodation packages cost 99 TL. The New Year's Eve menu at Elite World hotels ranges between 69 and 230 TL.