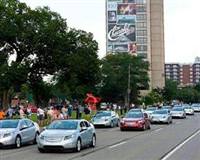 GM said it knows of no crashes or injuries due to the issue. GM said it is recalling the cars to see if inner or outer front brake pads are missing.

GM said that its research shows that between 20 and 30 of the recalled cars were sold without one of its brake pads. Of the total recalled, 4,296 were sold to U.S. customers and 577 to Canadian customers, GM said.

The issue was discovered during warranty service on a rental Sonic, GM said.

Customers will be informed of the recall by mid-January, GM said. If technicians at GM dealerships find that a brake pad is missing in a Sonic, they will, if needed, install new inner and outer pads. If needed, brake calipers and brake rotors will also be replaced, at no cost to customers.

GM just started selling the Sonic several months ago. Through November, it sold about 10,000 Sonics in the U.S. market, and nearly half that total in November.

The Sonic is made at GM's plant in Orion Township, Michigan. GM and the United Auto Workers union agreed to allow up to 40 percent of the production workers at the plant to be paid less than veteran UAW workers. The agreement was necessary to keep the Sonic from being produced outside the United States, the UAW and GM have said.