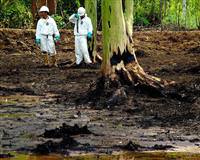 An Ecuadorean appeals court on Tuesday upheld a ruling that Chevron Corp should pay $18 billion in damages to plaintiffs who accused the U.S. oil giant of polluting the Amazon jungle and damaging their health.

A local judge ordered Chevron to pay $8.6 billion in environmental damages last February, but the amount was more than doubled to about $18 billion because Chevron failed to make a public apology as required by the original ruling.

"We ratify the ruling of February 14 2011 in all its parts, including the sentence for moral reparation," the court in the Amazonian city of Lago Agrio said in its ruling, which was obtained by Reuters.

The events are being watched closely by the oil industry for precedents that could impact other big claims against companies accused of pollution in the countries where they operate.

Chevron swiftly denounced the appellate court's ruling, calling it "illegitimate" and a fraud.

"Today's decision is another glaring example of the politicization and corruption of Ecuador's judiciary that has plagued this fraudulent case from the start," it said.

"The Lago Agrio judgment was procured through a corrupt and fraudulent scheme, much of which was captured on film and memorialized in the plaintiffs' representatives' own emails and correspondence."

In a statement, the company said it was pursuing an action in the U.S. District Court for the Southern District of New York against the plaintiffs' representatives regarding violations of the federal racketeering statute and common-law fraud.

The second largest U.S. oil company could also call for the intervention of Ecuador's Supreme Court in the case, which would open a new chapter in the 18-year-old legal saga.

The plaintiffs accused Texaco, which was acquired by Chevron in 2001, of dumping oil-drilling waste in unlined pits, polluting the forest and causing illness and deaths among indigenous people. They appealed the original court ruling, claiming more money would be needed for the cleanup.

"This (ruling) confirms and ratifies that the company polluted and affected the Amazon," the plaintiffs said in a statement. "It is necessary to clarify that no amount will be enough to repair all the crime they did in our area, nor will it be enough to bring the dead back to life."

Chevron had also appealed the ruling, arguing that Texaco cleaned up all waste pits for which it was responsible, and said the Ecuadorean judge in the original case had ignored evidence of fraud on the part of the plaintiffs.

'JUSTICE HAS BEEN DONE'

Commenting on the appellate court's decision, Ecuador's leftist president, Rafael Correa, said he was happy, and he described the dispute as a "David and Goliath" battle.

"I think justice has been done. The harm that Chevron caused to the Amazon cannot be denied," Correa told reporters in the coastal city of Guayaquil.

Chevron has also been under pressure recently over environmental issues in Brazil. Last week, Brazil's oil industry watchdog issued a third citation against the company for an oil spill at an offshore field in November.

The company has also been cited in a $20 billion civil lawsuit filed by public prosecutors over that spill. Brazilian federal police have indicted Chevron, the drilling company Transocean and executives from both companies in a criminal case alleging environmental crimes and obstruction of justice.

The long legal battle in Ecuador has spawned accusations of dirty tricks and bribery. Activists portray it as a fight for justice against rich polluters - but Chevron says it is driven more by opportunism and greedy lawyers.

A judge in New York sought to freeze the original judgment against Chevron, but the decision was overruled on appeal in September.

Chevron has argued that Ecuador's judicial process has been corrupted and is banking on international arbitrators who are expected to decide this month if they will weigh in on what has become a landmark international legal dispute.

A tribunal working under The Hague's Permanent Court of Arbitration ordered last February that Ecuador suspend enforcement of any judgment in the lawsuit, pending a decision by its panel.

The arbitration could then take years, if a previous dispute with Ecuador is any guide. It took four years for a separate international tribunal to rule that the OPEC-member country must pay Chevron $96 million in connection with commercial claims made in Ecuadorean courts in the early 1990s.