Spring is over, now they are running to Turkey 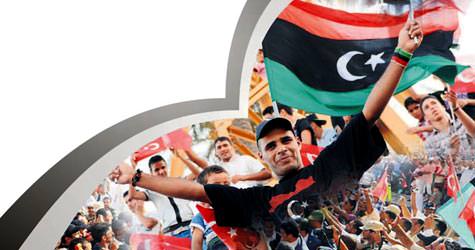 After the Arab Spring, Turkish firms are taking on a leading role in the region’s new restructuring. While businessmen traffic with North Africa increases, Western firms have been pushed to the background.

Interest is increasing in Turkish firms for the newly restructuring of countries which experienced the Arab Spring. With forums and meetings held one after the other, Turkish firms are participating much more than Western firms. A meeting held by NGO Namaa in Tunisia, intending to deal with increasing investments and economic collaborations will solely be attended by Turkish and Libyan businessmen. The meeting, which will have 200 businessmen in attendance, will include 40 businessmen from Turkey and 60 from Libya. There is also a lot of interest from the Gulf Region. Foreign Economic Relations Board (DEİK) Turkish-Tunisian Business Council Chairman Levent Soylu, who will be attending the forum held on January 12th and 13th in Tunisia states, "The fact that we have been there for them during this trying time and the many visits paid by businessmen and ministers has increased sympathy towards Turkey as well as elevated our image. This positive image just continues to strengthen."
EUROPE MADE A MISTAKE
Stating that they are still experiencing the positive effects of large committees having visited during the transitional period, Soylu states; "During that time period, European countries made strategic mistakes. We also had signed a free trade agreement with Tunisia four years ago. Every year new products change hands without customs, in ten years it will be completely lifted. We especially deal with exports in food, the automotive supply industry, textiles and fabrics."
Turkish-Libyan Business Council Chairman Ersin Takla states that this demand is the result of positive policies as well as the fact that other than Turkish firms, there are no others that have the characteristics and cost abilities to embrace restructuring.
WE ARE MORE COMPETITIVE THAN CHINA
Takla states, "Even China now offers less competitive prices than we do. Contrary to the past, China is no longer a nation that can offer inexpensive and good proposals. Of course it is also far from the region." Yet another nation, Egypt, sent approximately 40 businessmen to Turkey in weeks past to discuss new restructuring projects.
The Gulf has 25 billion dollars worth of business
In addition to North African countries; the Gulf nations are also showing an increased interest in Turkey. Turkey will also be participating in the January 16th-19th World Energy Summit in Abu Dhabi with a number of businessmen and at the ministerial level. Yet another forum with Gulf nations will be held in Istanbul. Erdoğan will be conducting the opening of the conference which is planned to result in the increase of trade volume and direct investments. At present, Gulf nations have ten billion dollars worth of active investments and 15 billion dollars worth of trade.
Iraq, the 'new address'
According to figures from the Turkish Employment Organization (İŞKUR), in the first ten months of 2011, 39,664 workers were sent abroad via agencies. Out of that figure, 8,404 workers were sent to Iraq.