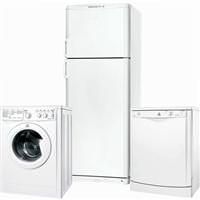 Speaking at the meeting, Taner Yıldız announced that they have ensured a 75 percent energy saving s in refrigerators compared to those from 1999, and a 75 percent energy savings in washing machines compared to those released in 1985. Minister Yıldız emphasized that with Turkey's production capacity of approximately 20 million, they need to change ten million appliances, "We will do this not only through condensed production but also with a campaign in which the state and the public will be hand in hand. Our Prime Minister will be leading this campaign."
Turkey's White Goods Producers (BESD) Chairman Özcan Aydilek, Arçelik General Manager Levent Çakıroğlu, BSH Executive Board Member Ronald Grunberg, Vestel VFO Ömer Yüngül and Indesit Sales Director Turgay Dağ all attended the meeting held to promote energy efficiency in white goods.
Speaking at the meeting, Turkey's White Goods Producers (BESD) Chairman Özcan Aydilek discussed the ways in which the collecting of the 15 million old refrigerator models in Turkey would provide further energy efficiency for our country. Aydilek emphasized that if we were to exchange the 15 million older models with A class refrigerators, the energy saved for Turkey would be equivalent to that of the energy produced ever year by two Keban Dams.
As a result it was announced that as of July 2012, Turkish White Goods manufacturers would be halting the production of older models and would shift gears to produce A class white goods, which have increased energy efficiency.
During his address at the meeting, Taner Yıldız stated that it was important to switch the white goods used in homes with energy efficient appliances in a manner that would not affect export figures.
Yıldız stated, "We see just ten percent of air conditioners, 30 percent of dishwashers and 50 percent of refrigerators work on A energy or above, however over 80 percent of air conditioners, one third of refrigerators, and one fifth of washing machines are ten years old or older. This is an indicator of the need for a significant transformation."
Minister Yıldız also pointed out that banks will not refrain from offering credit on projects that transparently transform energy inefficiency into energy efficiency.
"When it comes to energy efficiency, we need to begin with the public. We need this to spread step by step throughout Turkey. In 2011, we spent 28 billion kWh. Seventeen billion kWh of that figure is directly from the consumption we spend on home appliances. "
WE WILL BE TRANSFORMING STREET LIGHTS INTO LED
Taner Yıldız also stated the need for serious energy savings through utilizing LED lighting.
"At present the point reached in global technology on led lighting is not at the level we would like. We have reached the end of our work not only with the Ministry of Energy, but also with universities. As technology develops, so does the variety of areas of possible implementation. As the public, we will be changing the street lights. This is a great opportunity for significant savings. The energy savings we could accrue from this is very important. We spend approximately 650 million liras. We need to make the type of choice in which we will not have to make changes over and over again. Therefore we are arranging for a significant area including street lights, to home usage and from industry to agriculture. We will be presenting this package to Mr. Babacan and then later to the Prime Minister. Every study conducted will be ones that reap concrete results."