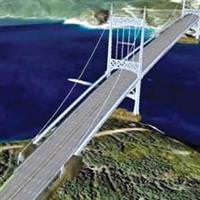 Turkey will hold a tender on Tuesday for a highway project, which includes a bridge across the Istanbul Strait linking Europe and Asia and which is seen costing around $5 billion.

Eighteen companies out of an initially interested 33 acquired formal tender specifications to submit offers for the North Marmara Highway project, including Japanese, Russian, Spanish, Austrian and Italian firms, as well as Turkish companies.

The General Directorate of Highways tender had been postponed until January 10 at the request of the interested companies.

The North Marmara Highway Project consists of a 414 km (260 mile) highway connecting Adapazari on the Asian side of the Marmara region to the Tekirdag region on the European side.

A third bridge over the Istanbul Strait, complete with a railway track, is also part of the $6 billion project, which will be Turkey's second largest built-operate-transfer model project.